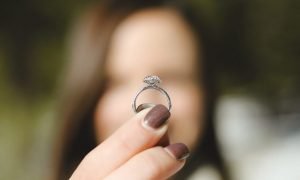 Whenever halacha as codified does not allign with halacha as lived I am fascinated to explore why this is the case, and a great example of this is the first Mishna introducing Perek ‘BaMah Isha’ on Shabbat 57a which lists the ornaments that may and may not be worn by women in public areas on Shabbat.

Though it should be noted that each of the ornaments listed in our Mishna offers a fascinating window into the accessories worn by Jewish women in the 1st-2nd century CE, especially as the son of a jeweler I was particularly struck by the ruling that women should not go out in a public area on Shabbat while wearing a ring that has no signet (nb. it is biblically prohibited for a woman to wear a signet ring on Shabbat because its purpose is not ornamental, while a non-signet ring may not be worn according to rabbinic law) which, according to the Gemara (Shabbat 59b), was decreed out of fear that women would remove their ornamental rings while in public to show their friends and thereby transgress the Torah prohibition of carrying. Singificantly, Rabbi Yosef Karo (Shulchan Aruch Orach Chaim 303:10) records this as codified halacha.

However, even from the time of the Geonim and Rishonim it seems clear that women did go out wearing jewelry, and given this, different halachic authorities chose to respond to such behaviour in a variety of ways, as Rav Karo explains (ibid. 303:18): ‘nowadays, our women have the custom of going out wearing all types of jewelry. And while there are those who say that technically this is forbidden but since they (i.e. the women) won’t listen [to prohibitive statements] it is better that they trangress unknowingly than do so deliberately, there are others who offer a halachic justification for such behaviour by saying that [such women] follow the position that the prohibition [of wearing jewelry in public] does not apply to a courtyard without an Eruv, and that since nowadays we don’t live in regions that are halachically categorised as a public domain, this means that all our public areas are comparable to a ‘Karmelit’ whose law is like a courtyard without an Eruv and thus it is permitted’.

Before proceeding, it is important to note the difference between the two reasons presented by Rav Karo. The first is insistent that the act remains prohibited but seeks to justify the silence of the rabbis, while the second offers an ex post facto justification, or what is know as a ‘limud zechut’ why women acted as they did. Interestingly, Rabbi Moshe Isserles (ibid.) added a further opinion justifying common practice, stating: ‘there are those who offer a further reason to permit [such behaviour] which is that nowdays we find that jewellery is also worn in the weekday, and thus we should not be worried that a woman may possibly remove them to show to their friends as was the concern in their days when it was only customary to wear jewelry on Shabbat’.

It should be noted that there are those such as Chana Safrai who have interpreted such rules as an act of social control which were ultimately ignored by women, while others might claim that the original decree was rooted in a premise, decided by men about the behaviour of women (i.e. women would remove their ornamental rings while in public to show their friends), which itself may not have been borne out in practice. Beyond this, the Aruch HaShulchan (OC 303:22) adds a further perspective on this, noting how women previously did not attend shul on Shabbat and only occasionally saw friends on Shabbat when visiting their homes. As such, the concern for using an improptu meeting in public to show off jewelry was previously high. However, he then writes that: ‘nowadays, women walk much more frequently in the streets and markets, and they see each other in shul, and therefore, women are able to show off jewelry in the home and in shul, and certainly it is not their way to remove jewelry in the street to show friends’.

Clearly there is much to discuss from all the above-mentioned sources, but one thing we should learn from here is that Jewish law as codified should ideally accord with Jewish law as lived, and when there is a dissonance between the two, we should take a moment or two to consider why.