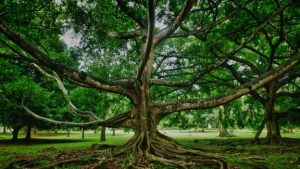 Significantly, the names used for three of these area (Reshut HaYachid, Reshut HaHaRabim & M’kom P’tur) demand little explanation. However, there is considerable debate about the meaning and origin of the name used for the fourth area known as a ‘Karmelit’.

According to the Yerushalmi (Shabbat 1:1) as cited by Tosfot, this term is drawn from the word ‘Karmel’ which is used in Vayikra 2:14 to describe grain that is neither completely fresh or completely dry. Alternatively, Rambam asserts that the word ‘Karmelit’ is a shortened version of the word ‘K’armelit’, literally ‘like a widow’, because a widow has been married but is currently unmarried. It should be clear that in both cases, a ‘Karmelit’ is presented as a kind of ‘in-between’ status.

However, Rashi takes a different approach. He explains that ‘Karmelit’ derives from the word ‘Karmilo’, found in Isaiah 10:18, to describe a ‘fertile forest’, and the reason why our Rabbis chose this term is because a fertile forest is not usually walked through by many passers by and nor is it viewed as an exclusively private area.

However, Rashi offers a different and refreshing perspective. Unlike our ‘in-between’ stages of life reminding us of what we may lack, he suggests that we see them as those when we can be most productive – like a fertile forest.

Ultimately, life takes us on many journeys, and while there are times when we understand where we are at, there are other times when we aren’t so sure. Still, as Rashi explains, even at the most ambiguous and in-between stages in our life, there is much possibility for growth.
×
×