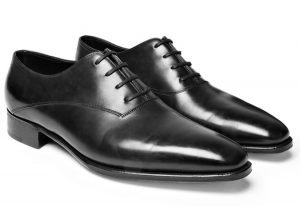 Today’s daf (Shabbat 61a) begins by relating how Rav Yochanan, whose tefillin (like all right-handers*) were worn on his left arm, would first put on his left shoe in order to reflect the sanctity of the left of his body which was wearing tefillin. However, it then informs us of a contradictory Beraita stating that the right shoe should first be put on which is consistent with a range of other practices where ‘right’ is given priority. Initially, the Gemara quotes Rav Yosef who explains that whichever order a person puts on their shoes, either left first, or right first, is fine. But then Abaye suggests that perhaps Rav Yochanan had dismissed the conclusion of the Beraita and was, in fact, making a more assertive ruling in direct challenge with its conclusions. Given all this, Rav Nachman Bar Yitzchak offers a solution for ירא שמים (i.e. those with a deep awe and profound awareness of God’s role in their life who wish to do all they can to live according to the laws and values of the Torah) that combines both opinions and that he had learnt from Mar the son of Rabana: ‘First put on your right shoe (but don’t tie it), then put on your left shoe and tie it, and then tie the right shoe’. Yet, it is of note that immediately after presenting this solution, the Gemara then records the testimony of Rav Ashi about Rav Kahana who, echoing the position of Rav Yosef, was not particular about the order in which he put on his shoes.

In attempting to make sense of this debate, Rabbi Yechiel Michel Epstein (1824-1908), author of the Aruch HaShulchan, offers the following fascinating analysis (OC 2:8):

‘In all areas of Jewish practice, Torah law ‘honours’ the right such as in the Temple service where only the right was appropriate for service…and so too with our (daily) actions, the right is prioritised first…However, with respect to the tying of tefillin we find that the Torah ‘honours’ the left since the tefillin are tied onto the left hand, and therefore, all actions relating to tying give priority to the left, and all acts of …putting on clothes give priority to the right. This approach is reflected in the writings of the Tur and the Shulchan Aruch (see OC 2:4) and in Gemara Shabbat (61a)…However, [it is noteworthy that all] the following Rishonim – the Rif, the Rambam, the Rosh, the Mordechai and the Semag, all omitted these rules and did not make reference to this concept whatsoever [in their halachic compendia]. [Yet, while none offer an explanation for their silence] it seems clear why they did so, and this is because the Gemara later relates the testimony of Rav Ashi about Rav Kahana who was not particular about the order in which he put on his shoes. Moreover, it should be noted that Rav Ashi was the last scholar recorded in this debate [and that Jewish law generally rules in accordance with the views of the later authorities. Thus it would seem that this is the position we should follow as reflected by the position of the Rif, Rambam et al].’

However, having seemingly proven that Jewish law does not require us to be concerned about whichever order we put our shoes on, the Aruch Hashulchan then adds the following words:

What we learn from all this is that the role of symbolism and mysticism in Jewish law has been a hotly contested topic since the time of the Gemara and that there have been many great figures who, on the basis of our Gemara, have argued that we need not be concerned by such matters. Yet, as the Aruch HaShulchan seems to intimate, sometimes Jewish law is aspirational, and that in this case, the codification of such practice in the Shulchan Aruch provides each of us with the daily opportunity to act in a manner that identifies each of us as a ירא שמים.

* for those who wish to know how these and other rules apply to left-handers, you can download a a useful guide in English titled ‘Yad Eliezer’ written by Rabbi Paysach Krohn from https://bit.ly/3b9ZqrU
×
×