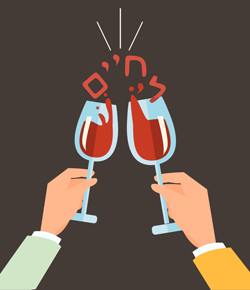 Mishna Shabbat (6:10, 67a) lists a number of curious objects which Rabbi Meir allows to be carried on Shabbat and which the Sages forbid because they constitute דרכי האמורי – “the ways of the Emorites”, and the subsequent Gemara then proceeds to discuss a variety of other items while considering whether their usage falls into the category of דרכי האמורי. This discussion then concludes (Shabbat 67b) by informing us that offering a toast with the words חמרא וחיי לפום רבנן – “wine and life to the mouth of the Rabbis!” does not contravene the prohibition of דרכי האמורי – “the ways of the Emorites”, and the Gemara then supports this position on the basis of Rabbi Akiva’s actions who, during a feast that he prepared for his son, offered almost the same toast (although in a slightly different order) over each cup of wine that was drunk.

On first glance this ruling seems to be out of place because, while all the previous cases listed seemed to at least have questionable דרכי האמורי leanings, why would we think that offering a toast such as חמרא וחיי לפום רבנן would even possibly constitute דרכי האמורי to require the Gemara to teach us otherwise?

This specific question was raised by Rabbi Yitzchak Guetta (1777-1857) who answers by referring to a different Gemara (Sanhedrin 70a) which informs us that ‘wine was only created to comfort mourners and to reward the wicked in this word alone as it is stated: “Give strong drink to him that is ready to perish, and wine to the bitter of soul” (Mishlei 31:6)’.

Based on this, Rabbi Guetta suggests that the toast חמרא וחיי לפום רבנן – “wine and life to the mouth of the Rabbis!” is a form of prayer offered by those drinking wine that they do not experience a bereavement, and our Gemara thus comes to inform us such drinking and such prayers do not contravene דרכי האמורי.

However, I believe that there is even more to learn from here beyond this technical fact concerning דרכי האמורי, especially since this story involves none other than Rabbi Akiva.

We often think of Rabbi Akiva as living an almost mythical life. However, the life of Rabbi Akiva was filled with tremendous stresses and tremendous losses including the death of 24,000 of his students (Yevamot 62b), the death of one of his sons (see Moed Katan 21b & Semachot Ch. 8), and especially the death and destruction caused by the Roman’s who were to later on kill Rabbi Akiva in a truly brutal fashion. Yet what always made Rabbi Akiva stand out as so powerfully expressed by the story when he and his colleagues saw foxes running through the remains of the Holy of Holies (Makkot 24b), was his ability to see beyond loss and destruction and focus on hope, life, and a better tomorrow.

It is not clear when this story takes place in the life of Rabbi Akiva or what specific event Rabbi Akiva and his son were celebrating, but we can presume that it occurs at a time of great national challenge and possibly at a time of personal loss. Yet what does Rabbi Akiva do? He makes a feast with wine and, rather than thinking of death and bereavement, he celebrates and drinks a l’chayim for life!

For some – possibly including the colleagues of Rabbi Akiva with whom he toured the remains of the destroyed Temple – such behaviour might initially appear to conflict with the Jewish way where we often dull our joy during a time of loss.

But this was the greatness of Rabbi Akiva who taught that looking beyond the present does not require that we ignore the present, while at the same time, also teaching that the Jewish spirit reaches beyond the here and now.