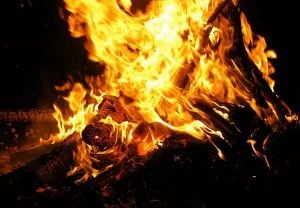 In today’s daf (Shabbat 70a) we are taught that there are 39 ‘melachot’ (i.e. creative acts) that are prohibited by the Torah. But while the Written Torah does not explicitly list all these prohibitions (Shemot 35:1-2), it does make explicit reference to the prohibition of הבערה – the kindling of a fire on Shabbat (see Shemot 35:3), and this raises the question of why this specific melacha was singled out?

According to Rabbi Yossi, this was done in order to teach us that though הבערה is counted among the 39 melachot, the punishment received for its transgression is less severe than the punishment received for transgressing all other melachot. However, according to Rabbi Natan, the reason for singling out the melacha of הבערה was to teach that just as the punishment received for transgressing this specific melacha is severe, so too, the punishment for transgressing all other melachot is also severe. What this means is that Rabbi Yossi considers הבערה as the least severe of all the 39 melachot, while Rabbi Natan considers הבערה as the leading example of all the 39 melachot such that it is used to teach about the severity of all 39 melachot. But how could these great Sages reach such different conclusions about this particular melacha? According to Rav Avraham Yitzchak HaKohen Kook (in ספר טוב ראי), this dispute is rooted in a fundamental disagreement between these two great Torah scholars about the nature and purpose of fire.

As mentioned above, the 39 melachot are creative acts, and therefore by refraining from performing such actions on Shabbat we bear witness to the concept of God as the Creator of the Universe. What this means is that our Rabbis treat the performance of destructive acts on Shabbat with far less severity than the performance of creative acts (see Shabbat 105b), and according to Rav Kook, this is the rationale for Rabbi Yossi who considers fire as primarily being something that burns and destroys and therefore considers הבערה as the least severe of all the 39 melachot.

But there is another way to view fire, and this is as an energy source enabling so many of our creative activities. In fact, this is why the first melacha that we perform each Motzei Shabbat during the Havdalah service is the kindling of a flame since fire is needed for so much of what we make, build, and create. Given this, Rav Kook explains that this is the reason why Rabbi Natan considers הבערה as the leading example of all the 39 melachot.