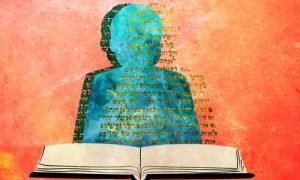 There are times when the biographical background of Talmudic scholars should not be presumed to frame their particular position on matters of Jewish thought and law. However, there are other times when it seems – at least to a certain degree – that the position of a specific Talmudic scholar can be better understood by considering their life story.

A case in point is today’s daf (Shabbat 71b) which discusses the sacrificial liabilities of those who erroneously commit multiple transgressions. Specifically, the case being considered is whether someone who ate two (kezayit) portions of food within one sitting, and was later informed that the first portion they ate was, in fact, forbidden fat (i.e. cheilev), and then soon after, told that the second portion that they ate was also of the same forbidden fat.

According to Rabbi Yochanan, such a person is liable to bring two sacrificial offerings for their transgression. This is because Vayikra 4:28 states that a person should bring an offering עַל חַטָּאתוֹ – ‘for their sin’, which Rabbi Yochanan understands to teach that a sacrifice must be brought for each individual transgression.

Contrasting this position is that of Reish Lakish who rules that such a person need only bring one sacrifice. According to Reish Lakish, this can be derived from Vayikra 4:26 which states that a sacrifice provides atonement – מֵחַטָּאתוֹ וְנִסְלַח לוֹ’for a person’s sin [from which] the person is forgiven’, meaning that even if a sacrifice is brought for only some of their sins, forgiveness is achieved.

Having now reviewed this debate let us now consider the relationship between Rabbi Yochanan and Reish Lakish who met during a chance encounter when Reish Lakish – who until that point had been a gladiator and bandit – was pursuing Rav Yochanan seemingly in order to rob from him (see Bava Metziah 84a). As the Gemara proceeds to inform us, this episode subsequently changed each of their lives. At that moment, Rav Yochanan persuaded Reish Lakish to redirect his strength to the study of Torah, and Reish Lakish, impressed by both the appearance and qualities of Rav Yochanan, became the matchmaker between Rav Yochanan and his sister.

From then on Rav Yochanan and Reish Lakish were inseparable – initially as master and student, and later, as colleagues and friends, and it is of note that these two scholars spent three and a half years just pondering the laws of the 39 melachot found in the seventh chapter of Massechet Shabbat (see Yerushalmi Shabbat 44a) as reflected by the many debates between them on our daf and others in this chapter. Nevertheless, their different backgrounds were often the basis for the different approaches that each adopted towards their Torah studies.

Given all this it is possible that this debate between Rabbi Yochanan and Reish Lakish on our daf is a further reflection of the attitudes of these two great scholars. For Rav Yochanan, teshuva (repentance) is a gift from God (see also his comments to Yoma 86b), but to be worthy of such a gift, each transgression must be atoned for with its own sacrifice. This is why Rav Yochanan requires two sacrificial offerings.

However, according to Reish Lakish – who himself was a ba’al teshuva – God shows grace in response to every gesture performed by a ba’al teshuva (on this point, see also his comments to Yoma 86b), and since God forgives more than what a person seeks atonement for, such a person need only bring one sacrifice.