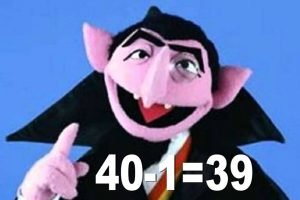 Within today’s daf (Shabbat 73a) is the Mishna (Shabbat 7:2) listing all of the 39 prohibited Shabbat Melachot. Yet rather than simply stating that there are 39 melachot, the Mishna uses a roundabout phrase of ארבעים חסר אחת – forty minus one, and this leads a number of commentaries to consider why it does so.

According to the Tosfot Yom Tov in his commentary to Mishna Shabbat 7:2, this phraseology is related to the laws of malkot (lashes) where, while the Torah informs us that a person deserving of such a punishment should receive בְּמִסְפָּר אַרְבָּעִים (Devarim 25:2-3), the Chachamim (Mishna Makkot 3:10) interpret this phrase to mean a maximum of ארבעים חסר אחת – forty minus one, which then leads Rava to observe ‘How foolish are those people who stand before a Torah scroll that passes before them and yet they do not stand before a great man (i.e. a Torah Sage), for in the Torah it is written that a person should receive forty lashes, yet the Sages came and subtracted one’ (Makkot 22b). What we learn from here is that the phrase ארבעים חסר אחת, while referring directly to a corporal punishment, also communicates a message of interpreting the Torah in a manner that expresses restraint, mercy, and a desire to minimize punishment wherever possible.

However, when we read the first lines of our Gemara (Shabbat 73b), a very different message is received. Having asked why the Mishna informs us of the number of prohibited Shabbat Melachot, the Gemara answers by citing the opinion of Rabbi Yochanan who states that this was done ‘to teach that if someone performed all of them (i.e. the 39 Melachot) in one lapse of awareness, they are obligated [to bring a sin offering] for each and every one [of the Melachot]’, meaning that, at least according to Rabbi Yochanan’s understanding of the Torah’s requirements, the enumeration of the Shabbat laws teaches us about maximising the number of sacrifices that a person needs to bring.

Of course, these cases are not quite the same. Nevertheless, especially as the Tosfot Yom Tov and others insist on associating these two teachings, one cannot ignore how ארבעים חסר אחת is used in one instance to teach about minimization, while the other usage of ארבעים חסר אחת is understood as teaching about maximisation, and to makes sense of this, I would like to refer to a profound interpretation of the opening words of the Torah as presented by Rabbi Sacks who writes: