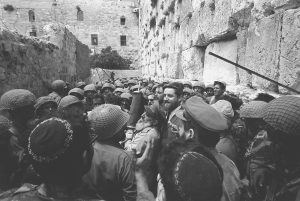 Today’s daf (Shabbat 77b) contains a number of fascinating aggadic (non-legal) passages but one which particularly stood out for me was the following Beraita:

By citing the verse from Amos which refers to God’s ability to effortlessly overcome even the most invincible of leaders, we learn from here that all of these seemingly invincible animals, each of which are the strongest in their respective habitats (lion in the savana; elephants in the tropics; scorpions in the desert; eagles in the sky and leviathan’s in the sea) can be effortlessly overcome by the mere presence of these much smaller animals. Given this, the Maharsha (Rabbi Shmuel Eliezer Eidels, 1555 – 1631) explains that we learn from here how ‘a person should never simply rely on their superior skills or on their physical strength [to overcome their adversaries], nor should a person ever give up hope of overcoming their adversaries [merely due to their weakness], because God has many agents’.

Of course, the most famous example of a battle of someone large against someone small and someone strong against someone weak where the smaller and weaker overcame the larger and stronger is the famous battle of David and Goliath (see Shmuel I Ch. 17). Significantly, when David told King Saul that he was planning to fight Goliath, Saul told him not to. As Malcolm Gladwell explains in his book ‘David and Goliath’: ‘the reason King Saul is skeptical of David’s chances is that David is small and Goliath is large. Saul thinks of power in terms of physical might. He doesn’t appreciate that power can come in other forms as well’ (pp. 12-13). Yet, as the Maharsha explained, a person should never give up hope of overcoming their adversaries merely due to their weakness – because God has many agents.

Significantly, the story of David and Goliath is particularly relevant to today, the 28th of Iyar, which celebrates the victory of the six-day-war and the reunification of Jerusalem. As we know, the Egyptian, Syrian and Jordanian armies were two and a half times the size of the Israeli army and they possessed far more sophisticated armory. Still, the David and Goliath battle was ever present in the minds of all present, which is why, as he prepared his troops for battle, Moshe Dayan reviewed this story with them and explained that notwithstanding the odds against them, the Israeli army would succeed.

Yet, as our Sages also explain, there was a story that preceded that of David and Goliath – a story that we will be reading next week – which sowed the seeds for David’s victory and that of future battles between Israel and its enemies. This is the story of Ruth who, we are told (Ruth 4:17) was the great-grandmother of David and who hugged Naomi and remained with her (see Ruth 1:14) and Orpah, who was the mother of Goliath (see Yalkut Shimoni basing itself on Shmuel II 21:18), who kissed Naomi and left. As our Sages explain (Sotah 42b): ‘God said – Let the sons of the one who kissed come and fall by the hands of the sons of the one who clung’. As I explained in an article and a shiur that I delivered on this text many years ago:

Wishing you all a Yom Yerushalayim Sameach!