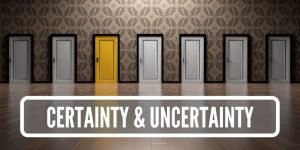 Today’s daf (Shabbat 87a) cites a Beraita informing us of three decisions, each on first glance seem hard to justify, that Moshe made מדעתו (‘from his own understanding’) which God then retrospectively agreed with: i) He added a third day of abstinence for the people in their preparation to receive the Torah, ii) He separated from his wife, and iii) He broke the luchot (tablets).

In the case of adding a third day of abstinence for the people (which, it should be noted, is only in accordance with the view of Rabbi Yossi – see Shabbat 86b), Moshe took this decision on Wednesday morning 4th Sivan. We are then told that God retrospectively agreed with Moshe as expressed by the fact that the Shechina did not rest on Mount Sinai until Shabbat morning 7th Sivan. What this means is that between Friday morning (the second day of abstinence commanded by God), and Shabbat morning (the third day of abstinence added by Moshe), there was no clear indication from God that Moshe’s decision was justified. Imagine waiting a full day not knowing whether the decision you have made, based on your own understanding, to delay the receiving of the Torah was justified?!

In the case of separating from his wife Moshe also took this decision on Wednesday morning 4th Sivan on the basis of God’s instruction concerning abstinence for the people. We are then told that God retrospectively accepted Moshe’s decision either: a) as evident from God’s instruction to the people on Shabbat 7th Sivan to ‘return to your tents’ (Devarim 5:27) which was then followed by an instruction to Moshe to ‘stand here with Me’ (ibid. v.28), or, b) as evident from God’s response to the criticism of Miriam and Aharon which occurred in Sivan of the following year (see Bemidbar 10:11). According to the first view, Moshe was given an indication by God that his decision was justified just three days after doing so. However, according to the second view, it was a whole year until Moshe knew for sure that God approved of his decision. Imagine waiting a full year not knowing whether the decision you had made, based on your own understanding, to separate from your wife, was justified?!

Finally, in the case of breaking the luchot, Moshe took this decision on the 17th of Tammuz. However, God only retrospectively accepted Moshe’s decision six weeks later at end of the month of Av. Imagine waiting six whole weeks not knowing whether the decision you had made, based on your own understanding, to shatter the sacred luchot was justified?!

It is often thought that the religious personality lives with a sense of clarity, certainty, and comfort with the full knowledge of what God wants from them. However, Moshe made three major decisions which, for various stretches of time, would have been the cause of him having sleepless nights given his uncertainty that his decisions were justified.

For some people, the absence of certainty is evidence that a particular decision they are considering should not be taken. However, Rav Soloveitchik explains in his essay ‘Sacred and Profane’ that while the Greeks spoke of the balanced and harmonious personality, ‘the Jewish ideal of the religious personality is not the harmonious individual determined by the principle of equilibrium, but the torn soul and the shattered spirit that oscillate between God and the world’.

So if, at some point recently, you took a difficult decision and are unsure of its outcome, know that you are in good company and that, as Rabbi Sacks explains: ‘Faith is not certainty. It is the courage to live with uncertainty. It is not knowing all the answers’ (Celebrating Life p. 83).
×
×