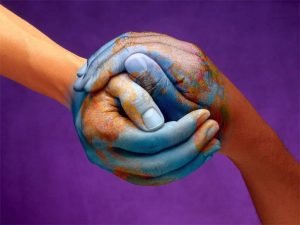 Among the many fascinating aggadic teachings found in today’s daf (Shabbat 89a) is a cryptic and curious story which I believe communicates an incredibly powerful lesson that is incredibly important and relevant for us today:

‘Rabbi Yehoshua Ben Levi taught that when Moshe ascended on high, he found the Holy One, Blessed Ben He, attaching crowns to the letters of the Torah. However, having ‘found’ God, Moshe did not say שלום (i.e. offer a greeting). Surprised by this, God asked Moshe, ‘Are there no greetings in your town?’, to which Moshe responded, ‘Is there any servant who greets his master?’. But God then replied, ‘You should have at least offered Me support’, to which Moshe immediately answered by saying “And now, may the strength of my Lord be magnified as You have spoken” (Bemidbar 14:17)’

To attempt to make sense of this piece let us start at the beginning where God is attaching crowns to the letters of the Torah. For those unfamiliar, this refers to the additional embellishments that are added to some of the letters of a Torah scroll that look like crowns, and I believe that what Rabbi Yehoshua Ben Levi is seeking to communicate here is that God is perpetually involved in improving, embellishing and enhancing the universe and in helping each human being feel and live with dignity and purpose as if they are wearing a crown on their head.

We are then told that Moshe did not offer a greeting to God because he felt that it was inappropriate for a servant to greet their master. Here it would seem that Moshe viewed the role of human beings as being distant servants of God whose task it was to follow the word of God (i.e. the Torah) but not to speak directly to God or assist God in spreading or promoting that word. On a deeper level I believe that it is of great significance that the word שלום, which is a term of greeting but which is also the word for peace, is used here. Given this, I believe that the lesson Rabbi Yehoshua Ben Levi is trying to teach us is that God expects humanity to actively involve themselves in the promotion of peace rather than merely hope that peace will be provided by God. Moreover, the very fact that the word שלום refers both a greeting between two people and to peace in the world also comes to teach us that the pursuit of peace begins when we care enough about people that we are prepared to take the time and make the effort to greet them and, through doing so, create a bond of care, love and friendship.

Still, by virtue of his response it seems that Moshe was of the opinion that there are limits to what humans can achieve, to which God then responded, ‘You should have at least offered Me support’. By using this phrase I believe Rabbi Yehoshua Ben Levi is teaching us that while there may be things that we as human beings cannot achieve alone without divine assistance, it is our task to work in partnership with God by promoting the Torah’s teachings and values (including how the principle of ‘Tzelem Elohim’ teaches us that every human being is created in the image of God; how the concept of ‘Chessed’ teaches us to do all we can to help others live with dignity and purpose as if they are wearing a crown on their head; and how the overall message of ‘Shalom’ in the Torah should inspire us to constantly seek and promote peace), and by praying to God.

The passage ends with the words that Moshe says to God, “And now, may the strength (כח) of my Lord be magnified as You have spoken” (Bemidbar 14:17), and in explaining these words I can do no more than quote Rabbi Samson Raphael Hirsch’s exquisite commentary on this verse which, I believe, speaks volumes:

‘According to heathen thought, the great might of its gods lies in destruction. But the true God is great not in might, but in power, כח. כח is the ability to create light out of darkness, and to transform opposition into agreement. כח fans the tiny harmonious spark that lies hidden in the very midst of the opposition and, through this spark, blazes a trail by which, in the course of time, the opposition can be overcome and transformed into agreement. To the כח mode of God’s rule which educates mankind, a thousand years are like one day of progressive development; “כח” has infinite patience, for it has the whole of eternity before it.’