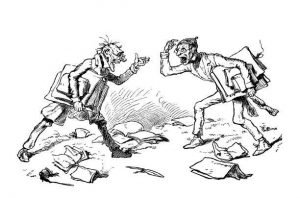 Sometimes when reading a Talmudic story it seems quite clear that there is more to the story than meets the eye, and in today’s daf (Shabbat 94b) I think we have such a story which, if examined sufficiently closely, reveals tensions between two people about Torah knowledge, rabbinic authority, and perhaps even some sibling jealousy. However, before we get there, a little background is required.
We have previously learnt (see Shabbat 30b and Shabbat 43b) that it is rabbinically prohibited to move a corpse on Shabbat (due to it being ‘mukzeh machmat gufo’). However, on the basis of the meta-halachic principle referenced in today’s daf that rabbinic prohibitions may be overriden for the sake of Kevod HaBeriyot (human dignity), a corpse may be moved on Shabbat in a manner, or to a location, that only involves a rabbinic transgression. With this in mind we can now turn to the story found in our daf which I shall tell in three parts (nb. I have embellished my translation of the Gemara to highlight key points that I think are relevant to the story):
PART 1 – There was a corpse found in the city of Derokera, and Rav Nachman bar Yitzchak permitted carrying it to a karmelit (a semi-public domain into which carrying on Shabbat only involves a rabbinic transgression).
Our protagonist Rav Nachman bar Yitzchak was a renowned scholar who later on in life became Head of the Babylonian Academy in Pumbeditha. But as we are taught elsewhere (see Pesachim 105b), his primary scholarly achievements involved accurately preserving and sharing the Torah teachings that he had received from scholars of earlier generations. A further point to note is that he was asked to rule about a case in the relatively unknown Babylonian city of Derokera which suggests that this incident occurred prior to him becoming the Head of the Academy while he was still developing his reputation as a leader and scholar.
PART 2 – Rabbi Yochanan, brother of Mar, son of Rabbana, said to Rav Nachman bar Yitzchak: ‘In accordance with whose opinion did you permit moving the corpse to the karmelit? If it was in accordance with Rabbi Shimon then you have erred, since while Rabbi Shimon ruled that there is an exemption from bringing a sin-offering when moving a corpse on Shabbat, there still remains a rabbinic prohibition in doing so. So, due to your error, you have granted permission for a prohibited Shabbat action!’.
Here, Rav Nachman bar Yitzchak is challenged by Rabbi Yochanan the brother of his close friend Mar who claimed that he had misapplied a ruling of Rabbi Shimon and thereby been the cause of a Shabbat transgression. It is not clear from the text why Rabbi Yochanan – who is not mentioned elsewhere in the Talmud – made this accusation against the renowned Rav Nachman bar Yitzchak – although it is possible that he resented the close relationship between him and his brother Mar. Still, for Rav Nachman bar Yitzchak who took pride in his accurate preservation and transmitting of the Torah teachings of earlier scholars, such an accusation would have been a bitter insult that he would have taken very personally.
PART 3 – Rav Nachman bar Yitzchak said back to him: ‘By God! It seems that it is you who doesn’t understand this matter! …. For there is a principle that, “Great is human dignity as it overrides [rabbinic] prohibitions of the Torah”, and thus, what I ruled is most certainly permitted’!
Though Rabbi Yochanan believed that he had identified an error in the reasoning of Rav Nachman bar Yitzchak, Rav Nachman bar Yitzchak responded with a bold and confidant rebuttal that Rabbi Yochanan’s criticism was reflective of his failings in comprehending the halachic decision-making process.
Rabbi Yochanan had clearly thought that Rabbi Shimon’s rule spoke of the case being decided, and since Rabbi Nachman bar Yitzchak – towards whom, as mentioned, he may also have had some personal resentment – had ruled differently, he simply must have been wrong.
However, as Rabbi Aharon Lichtenstein explains in his essay ‘The Human and Social Factor in Halacha’, halachic decision-making ‘does not entail the definitive postulation of the law governing a delimited area or its detail, but, rather, the concurrent and coordinate meshing of all aspects, possibly drawn from widely divergent spheres, obtaining in a concrete situation’. Phrased differently, halachic-decision making is not merely about applying singular laws to all situations. Instead, it involves the application of a range of laws and meta-principles, considered with an understanding of a context, and applying them to specific situations, and given all this, Rabbi Nachman bar Yitzchak’s ruling was correct.
As mentioned, it is not clear why Rabbi Yochanan challenged Rav Nachman bar Yitzchak. It could be because he genuinely thought he knew better. Alternatively, it could be that he was seeking to challenge the rabbinic authority of this rising star. Or, possibly, it could be because of a personal resentment towards him. Either way, if he thought that he had found a way to humble, undermine or frustrate Rav Nachman bar Yitzchak, he was very much mistaken.
Nb. A shorter version of this insight will בע”ה be published a little later on at https://www.myjewishlearning.com/article/shabbat-94/
×
×