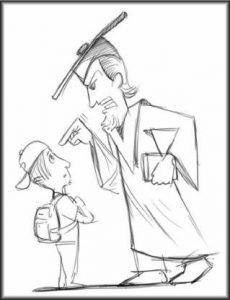 Today’s daf (Shabbat 95a) tells a story of which variations have sadly been repeated many times since and which illustrates how Torah knowledge can often be weaponised to insult others.

The story begins when Rav Nachman (Chama*) bar Guyra visited Nehardea. Significantly, Rav Chama was a loyal student of Rav who was head of the Babylonian academy in Sura, while the students of of the Babylonian academy in Nehardea often attempted to outsmart those of Sura (nb. for an example of Rav Chama’s preparedness to defend Rav’s rulings from the critiques of those of Nehardea – see Yerushalmi Kiddushin 3:12). However, while Rav was an outstanding expert in both halachic rulings and halachic reasoning, his student Rav Chama seems to have been more interested in preaching ethical teachings while focussing his halachic interests to certain areas of Jewish law (eg. the laws of reading the Megillah).

Having arrived in Nehardea, Rav Chama was immediately confronted by the students of the academy who asked him three difficult questions about the categorisation of specific Shabbat transgressions. Rav Chama was unable to answer the questions effectively, and in response, the students taunted him and insulted his teacher.

It is not clear from the text whether the students actually knew the answers to these questions and were testing Rav Chama, or they didn’t and were still testing him. Nevertheless, given the fact that they did not then tell him the answers or engage him in a thoughtful conversation, it is evident that their challenge was all about point-scoring and nothing to do with the sincere pursuit of understanding Torah. But unlike these young men, Rav Chama was a sincere student of Torah, and this is why, notwithstanding the insults he had just received, he then sought a place of study and found some scholars who were prepared and able to offer him answers to these questions (nb. the very fact that these scholars knew the answers strongly suggests that so did the students of the academy). What we learn from here is that while there are many sincere people who wish to learn Torah and grow from Torah, and there are occasionally some people who, notwithstanding their privilege of knowledge, use it as a weapon to insult others, and perhaps the most stark story of this message is found elsewhere in the Midrash (Vayikra Rabbah 9:3) which is so powerful that I have chosen to share its full text:

‘Rabbi Yanai was walking down the road when he encountered an individual who wore the elegant attire of a Torah scholar. Rabbi Yanai asked him, ‘May I invite you to join us for dinner?’ The stranger replied, ‘Yes, thank you.’ The stranger accompanied Rabbi Yanai to the latter’s home, where he wined and dined him. Rabbi Yanai checked his guest’s knowledge of the Bible and found that he knew no Bible. He checked his knowledge of the Mishna and found that he knew no Mishna. He checked his knowledge of aggadic literature and found that he knew no aggadic literature. He checked his knowledge of Talmud (that is, Gemara) and found that he knew no Talmud. Rabbi Yanai said to the guest, ‘Please take the wine goblet and recite the ‘Birkat Hamazon’ (‘Grace after Meals’) prayer’. The guest replied, ‘I would be happy if my host, Rabbi Yanai, would recite that blessing because, after all, this is his home, not mine.’ Rabbi Yanai asked him, ‘Could you repeat after me everything that I will say?’. ‘Yes’, he replied. ‘Then repeat after me: “The dog ate Rabbi Yanai’s bread” (ie. you, who have been my guest for dinner, are as knowledgeable as a dog)”’. The stranger rose and grabbed Rabbi Yanai, saying to him, ‘You possess a legacy and you are denying it to me.’ ‘What do you mean,’ asked Rabbi Yanai, ‘I am in possession of your legacy?’ The stranger replied, ‘I once passed a school and I heard the pupils reciting, “ תּוֹרָה צִוָּה לָנוּ מֹשֶׁה מוֹרָשָׁה קְהִלַּת יַעֲקֹב- Moshe commanded us a law; the inheritance of the congregation of Yaakov” (Devarim 33:4). Pay attention! They said ‘the congregation of Yaakov,’ not ‘the congregation of Yanai.'” (ie. it is the legacy of the entire Jewish people, not just yours). R’ Yannai paused and then said, ‘Through what merit do you eat at my table?’ He said, ‘Never in my life have I countered a person who badmouthed me. Never in my life have I seen two people arguing and not made peace between them.’ R’ Yannai said, ‘You demonstrate such Derech Eretz (upright conduct). How wrong I was to have called you a dog! Of you it is written: “To him who improves his way (Derech) [I will show the salvation of God]” (Tehillim 50:23)… and this is what was meant by Rabbi Yishmael Bar Rav Nachman that there were twenty-six generations (whose purpose it was to teach us Derech Eretz) prior to the giving of the Torah, in order to teach us that Derech Eretz is a precursor to Torah.’

In the case of our daf, notwithstanding the insults directed towards him and his teacher, Rav Chama was able to walk away from these young men and find some real scholars with whom he could learn, and in the case of the Midrash, notwithstanding the harshness of the insults directed towards the nameless individual, he was able to find the words to challenge Rav Yanai who eventually realised the error of his ways. However, it is important to note that these two were the ‘lucky’ ones, and that, far too often, those who use their knowledge as a weapon to insult or outsmart others do lifelong damage to their victims.

Sadly, in my younger years, I too experienced some of the behaviour described in these two sources, but fortunately, I too was determined to demonstrate that Torah is the legacy of the entire Jewish people and not just those who know the most, and that those who authentically represent Torah are those who understand that Derech Eretz is a precursor for Torah, not those who can most easily outsmart others. And this is why my lifelong mission is to share the little that I know in a manner that empowers, rather than disempowers, those I am privileged to teach.

* There is no record of Rav Nachman bar Gurya in the Talmud, whereas there are around 21 references to Rav Chama bar Gurya. The Munich manuscript along with most over records of this daf refers to ‘Rav Chama bar Gurya’, and therefore, as Rabbi Raphael Natan Rabinovitch writes in his Dikdukei Sofrim, this clearly must be correct.