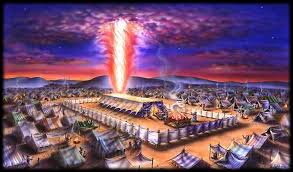 In today’s daf (Shabbat 98a) we find a debate about whether carrying in a covered public area is prohibited since the דגלי מדבר (literally ‘the flags of the wilderness’ but a term used to refer to the original encampment area of Bnei Yisrael in the wilderness) did not contain any public covered areas.

Having seen many illustrations of the דגלי מדבר I knew this fact intellectually. However, having learnt today’s daf which highlighted this point, I then started thinking about public spaces, what we expect from them, and the interrelationship between private homes and public areas in the communities where we live.

Of course, as various commentaries point out, Bnei Yisrael themselves were fortunate since they were protected by the ענני הכבוד (the clouds of glory), although as the Rivta explains, even the ענני הכבוד did not create a physically public covered area. Nevertheless, the question that I started thinking about is what does a society look like when there are no publicly covered areas.

As someone who spent much of their life in the UK, there were plenty of occasions when I was stuck outside during a regular downpour and, on regular occasions, I was relieved to find shelter in a bus stop or in a mall. However, even with the harshest of rain I would not have knocked on the door of a strangers home to seek refuge. But then I moved to Israel – first to Yad Binyamin, and then to Even Shmuel – and I experienced a very different model of what community is all about.

For those who don’t know these yishuvim, both are near the South of Israel which means both have been targets for rockets launched by terrorists in Gaza. Naturally, I forged friendships in both communities. However, there was always an understanding that if you were stuck outside – perhaps on a run or perhaps just walking from one place to another – and you hear a siren, you can open the door and go into anyone’s home – friend, neighbour or stranger – and know that you will be safe there. And why? Because in communities such as these each resident looks out for everyone.

Remembering this I then thought again about the דגלי מדבר and the idea of living in a camp whose centre was the Mishkan. Though the Mishkan was a building, it wasn’t just a building. Instead, it was an expression of the social covenant that bound together all those living around it, and in doing so, it taught and affirmed the values of caring for each other.

Having thought about this I came to realise that there was truly no need for public covered areas in the encampment area, because – like my experience in Israel – whenever someone needed cover, shelter, and a place to go to protect them from the rain or the sun, they knew that they could find it in the home of another – whether a friend or a stranger – who would graciously welcome them into their home with the understanding that true community isn’t just when you look out for your friend, but rather, when you look out for everyone.