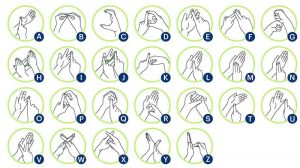 The Mishna (Shekalim 5:1) in today’s daf (Shekalim 13a) tells us about Petachiah – better known to use as Mordechai (from the Purim story) – who was a Temple administrator, a member of the Sanhedrin, and who spoke seventy languages.
The Gemara (Shekalim 13b) then quotes a Beraita which informs us that a Sanhedrin must have at least some members who can speak seventy languages (so they can communicate with foreign witnesses), while we are taught elsewhere (Sanhedrin 17a) that every member of the Sanhedrin should be able to understand seventy languages.
We are then told of two incidents when, during a time of national crisis at which time barley could not be found for the barley Omer, a deaf-mute used a form of sign language which was understood by Petachiah and which then directed him to where barley could be found.
Overall, what we learn from here is the importance of religious decisors being qualified in a range of skills and languages so they have the necessary Chochmah (general wisdom) to understand the world for which they are rendering decisions.
Of course, much of this Chochmah can – and should – be acquired through formal learning. Still, it is worthwhile noting that a decisor may often find themselves learning not just from teachers and books, but also through the experiences they have.
A great example of this is found in Responsa Shevet Sofer (Even HaEzer No. 21) who reports how his father Rabbi Avraham Sofer (1815–1871) was unsure whether the deaf were, in his day, still to be considered exempt from some mitzvot as previously held by rabbinic sources, given their inability to clearly communicate.
Then, while visiting Vienna, he was invited to visit a deaf school to see – with his own eyes – how formal training had enabled and empowered the deaf to communicate with sign language. Rabbi Sofer accepted the invitation and he was marvelled by what he saw, and this led him to reconsider the halachic status of the deaf.
I mention this story not only because it also speaks of sign language (like the two incidents found in our Gemara), but also because it teaches us that the learning of a halachic decisor is not limited to a formal academy. While Rabbi Sofer may have been able to excuse himself from accepting the invitation from the deaf school, instead, by visiting this school, by paying attention to what he saw, and by reflecting on its significance, his ruling significantly changed the modern halachic landscape.
From here we learn that while a halachic decisor must be well trained in the learning and interpretation of our sacred Torah texts, they must be also trained in the Chochmah of the world, which can be found in universities and books, as well as in the meetings they have with different people, and in the visits they make to different settings.
×
×