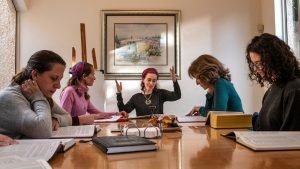 While the Gemara’s method of communicating various teachings and rulings often involves lengthy dialogues and discussions, as well as detailed interpretations, of biblical verses, there are other times when just a few short words can communicate a profound message that are already embedded in the words of the Tanach.
A case in point can be found in today’s daf (Shekalim 15a) where, in a discussion about the sensitivity that must be shown when giving charity, Rabbi Yona refers to Tehillim 41:2 and notes that it does not say אַשְׁרֵי נוֹתֵן לְדָל – ‘praised be the one who gives to the poor’, but rather, אַשְׁרֵי מַשְׂכִּיל אֶל דָּל – ‘praised be the one who contemplates the poor’. As he explains, this comes to teach us that part of the mitzvah of giving to others requires that we should מִסְתַּכֵּל בַּמִּצְוָה הֵיאַךְ לַעֲשׂוֹתָהּ – carefully contemplate how to give while maintaining the dignity of the recipient.
Admittedly, it could be argued that Rabbi Yona did not say anything new. Ultimately, it seems that all he did was put a metaphorical line under the words of מַשְׂכִּיל אֶל in that verse to highlight their significance. Given this, the question we should consider is how was it that only Rabbi Yona noticed what should seemingly have been clear to all people?
The answer, I believe, is found in the following lines of the Gemara when we are told that Rabbi Yona was highly sensitive to maintaining the dignity of those whom he helped, and how he found creative ways to give financial assistance to those in need, without them feel like they were in need.
Understood this way, the reason why Rabbi Yona noticed this message embedded in Tehillim is because it beckoned him and spoke deeply to him. Rather than the words אַשְׁרֵי מַשְׂכִּיל אֶל דָּל being a quaint moral teaching whose nuanced message may have been lost on some people, these words were a form of calling to Rabbi Yona, as well as an affirmation of Rabbi Yona, concerning the way he performed his acts of lovingkindness.
We often think that since the words in our Tanach are the same, then we must obviously read them the same. Yet what is so extraordinary about the experience of learning Tanach as well as many other great works, is that different words beckon and speak to different people in different tones. And this is why Torah learning is so rewarding, because – as has been said many times – just as when we pray we talk to God; when we study Torah, God talks to us.
×
×