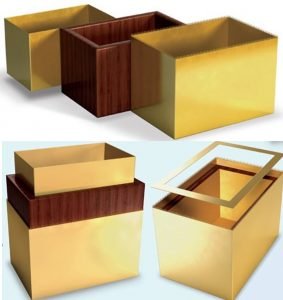 Much of today’s daf (Shekalim 16) explores the dimensions and manufacture of the Aron (Ark), and it is here where Rabbi Chaninah explains the meaning of the instruction found in Shemot 25:10-11: “Make an ark of acacia wood, 2½ cubits long, 1½ cubits wide, and 1½ cubits high. Cover it with a layer of pure gold on the inside and outside and make a gold rim all around its top”.
Specifically, Rabbi Chaninah explains that Betzalel made the ark out of three תיבות (boxes): ‘Two of gold, and one of wood’, where ‘he put [the smaller] golden [box] into the wooden [box], and he put the wooden [box] into the larger golden box’ such that the inner and outer box of the Ark were of gold, and the inner box was of wood.
Reflecting on this teaching, Rabbi Hirsch (in his commentary to Shemot 25:11) explains that we can draw a profound lesson from the way the Ark was constructed – in terms of the contrast between the unbending metal, and the wood which represents natural growth:
“Receptivity and the capacity for vital development must be combined with steadfastness, perseverance and constancy in all that is noble and good and true. The wood must be joined by metal… God’s Torah requires of those who accept it, in order to fulfill it, a capacity for development coupled with steadfastness, and this noble steadfastness must prove itself inwardly and outwardly… These are the golden limits within which your life is to unfold, growing by stages, like a tree, from within the Torah.”
What we learn from here is that while there are things that are fixed values in Judaism as well as things that a Jew cannot do, within these golden limits there is considerable room for personal growth.
More recently, a similar message was taught by Rabbi Shlomo Wolbe in his book זריעה ובניין בחינוך (which has been translated into English under the title ‘Planting & Building in Education: Raising a Jewish Child’), where he notes how many Jewish texts and teachings couple the image of a fixed ‘steadfast’ building with that of organic opportunities for growth – for example, the two brachot in the Amida about Jerusalem speak of בונה ירושלים (‘who builds Jerusalem’) and of מצמיח קרן ישועה (‘who makes the glory of salvation grow’), and even the Ramchal in his Mesillat Yesharim begins by alluding to both these qualities by speaking of the יסוד החסידות (‘the foundation of piety’) and the שורש העבודה (‘the root of service’) – and how education, both in schools and at home, must balance concrete learning outcomes with the opportunity for personal growth.
Sadly, too often Jewish schools, and Jewish parents, get the balance wrong. In some instances, there is too greater an emphasis on foundations and building, and too little on personal growth; while there are also times when our students leave schools with insufficient Jewish knowledge and skills.
And this is why, when we face the Ark in shul, we should recall the original Ark, and its blend of gold and wood, and by doing so remember how Jewish living, and Jewish education, is all about getting the balance right.
×
×