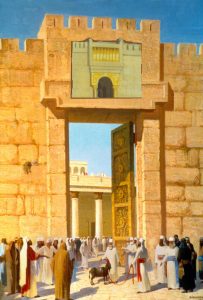 Today’s daf (Shekalim 4) informs us that donations for the upkeep of the Beit HaMikdash (Temple) should not be sought from idolatrous non-Jews, and that if a donation is made, it shouldn’t be a distinctive identifiable object.
However, in the Gemara elsewhere (Arakhin 6a) we find that Rav Yosef raises a challenge to this, since we are told that Nechemiah requested from the king of Persia ‘that he may give me timber to make beams for the gates of the castle that pertains to the house’ (Nechemiah 2:8). Clearly these beams, which were to frame the gates of Jerusalem, would have been identifiable. Given this, how could Nechemiah make such a request? Abaye answers this question by distinguishing between individual donations and donations that are sought from the government.
Yet notwithstanding this distinction we must still consider why Nechemiah made this request, and to answer this question, we need to learn a little about the gates of Jerusalem.
We are told in the Mishna (Middot 1:3) that: ‘There were five gates to the Temple Mount: The two Huldah gates on the south were used both for entrance and exit; the Kiponus gate on the west was used both for entrance and exit; the Taddi gate on the north was not used at all; and the Eastern gate over which was a representation of the palace of Shushan and through which the high priest who burned the red heifer and all who assisted with it would go out to the Mount of Olives’. But why was there a ‘representation of the palace of Shushan’ above one of the gates leading to the Temple?
Rambam explains in his commentary to the Mishna that when the Jews returned from Shushan to rebuild the Temple, the king of Persia commanded them that they place an image of the palace of Shushan somewhere in the Temple so that ‘there should be an awe of the monarchy by the people, and so that the people should remember their return from exile and not rebel against the monarchy’. And given this specific request, it seems that Nechemiah felt it proper to ask the king to donate specific timber for this purpose.
As we know, Bnei Yisrael came to Jerusalem on Pesach, Shavuot and Sukkot to celebrate, and I imagine that when those who passed through the Eastern gate and saw this emblem as they walked towards the Temple, they were filled with a sense of thanks and appreciation that they had returned from exile. And so, while today’s daf teaches us that Temple donations should not be sought from idolatrous non-Jews, the emblem above the Eastern gate reminded the people of a truth that we continue to see even in our own day – that God often employs a range of different agents to help the Jewish people find their way home.
×
×