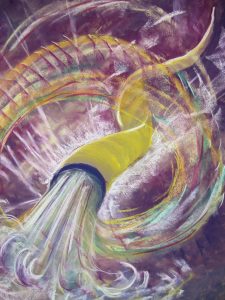 The Mishna (Shekalim 2:1) found in today’s daf (Shekalim 5a) informs us that just as there were half-shekel donation boxes for the upkeep of the Beit Hamikdash (Temple) within the Beit Hamikdash itself, so too, every Jewish community outside of Yerushalayim also had half-shekel donation boxes for this same purpose. Thus, wherever a Jew was living, not only did they face Yerushalayim in prayer, but they also made annual contributions to the Beit Hamikdash which ensured that Yerushalayim was not just where Jews directed their heart, but also where they directed at least some of their charity.
Interestingly, the Mishna describes those donation boxes as שופרות (literally, ‘shofars’), and this is because, like a shofar, they were narrow at the top and wide at the bottom. Of course, the practical reason why this was so was in order to prevent unscrupulous people from taking money from the box once a donation had been made. At the same time, I think that a further reason why these boxes were shaped like שופרות was because, by making a donation, every Jew boldly proclaimed – like the sound of the shofar – that though they were not physically in Yerushalayim, they still feel deeply connected to this holy city.
Yet there is one further reason why I am inspired by the association between a charity box and a שופר, and this is because a שופר transforms air into sound, and it upgrades a quiet blow of air into a booming voice that can be heard from a great distance, and in the same vein, when we donate out money, our objects or our time, then what may be a relatively insignificant donation to us can make a huge difference to another.
Tomorrow night at the Seder, we will begin the ‘Magid’ section by proclaiming ‘all who are hungry, let them come and eat; all who are needy, let them come and celebrate Pesach’. But as Rav Soloveitchik points out, this seems repetitive because if we’ve invited those who are hungry to come and eat, what further needs can we be referring to in the second statement?
He answers that this refers not to material needs but to emotional needs, and it hints to someone with plenty food who lacks company, or whose emotional needs are being overlooked. What this means is that just as we must concern ourselves for the physical needs of others, it is essential that we consider their emotional needs as well. And though a particular gesture may seem relatively small to us, it may well mean the world to another.
With this in mind, I would like to take this opportunity to bless each of you – from the depths of my heart – a Chag Kasher Sameach!
×
×