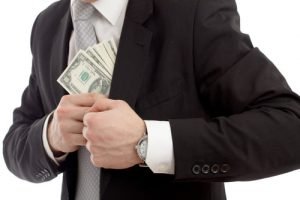 We are taught in the Mishna (Shekalim 3:2) found in today’s daf (Shekalim 8a) that someone who withdraws money from the treasury chamber of the Beit HaMikdash may not do so with a hemmed garment or with anything else that could conceivably be used to hide money. This is because – as we derive from Bemidbar 32:22 and from Mishlei 3:4 – ‘a person must satisfy the scrutiny of people just as they must satisfy the scrutiny of God’. Explained differently, ‘acting in a way which may draw suspicion upon oneself is in itself sinful’ (as stated by Artscroll commentary to the Mishna), and thus such actions should be avoided.

Clearly this principle has many applications in our daily life, but central to its application is how likely, or how far-fetched, is a particular suspected behaviour associated with a particular action given our understanding of human nature.

In the case of our Mishna which deals with money, as well as other examples like this found elsewhere in the rabbinic literature which speak about sexual morality , the suspicion is clearly present even if the individual themselves is trustworthy, and thus as a way of maintaining the presumption of their trustworthiness, such an individual must avoid acting in a manner that could draw suspicion upon them. It is from here where we learn that no matter how well respected or righteous a person is, they must avoid actions which may appear to others as if they are acting inappropriately even if they are actually doing nothing wrong.

Ultimately, what this Mishna teaches us is that for a healthy society to function, we must have faith in those around us and especially in those with communal responsibilities. But for this to be so, those with such responsibilities must be exceedingly transparent in their actions, and they must take care that their behaviour does not give cause for others to suspect them of misbehaviour – however well respected or righteous they may be.