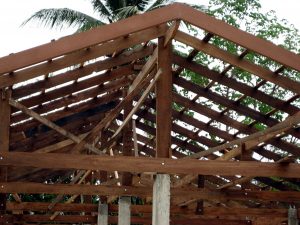 The Mishna (Sukkah 1:7) in today’s daf (Sukkah 15a) presents a variety of opinions about what must be done to transform a yet-to-be-finished roof of a house where the beams are in place, to a valid sukkah roof.
For example, according to Beit Shammai, the beams must be loosened and symbolically moved (to demonstrate that this roof is now being deliberately constructed as a sukkah roof) and a beam must also be removed from between every two beams where s’chach should then be placed. According to Beit Hillel, either one of these actions suffices, while according to Rabbi Meir, only the latter action of removing the alternate beams is required.
Reflecting on our Mishna, though disagreement exists about how this transformation must be done, all seem to agree that some dual act of deconstruction and reconstruction is necessary to transform and to ‘convert’ the roof of a house to the roof of a sukkah. But why?
Though there are a number of technical reasons why this is so including a rabbinic decree against using a house roof as a sukkah, the overall reason for this is rooted in the Talmudic principle of תעשה ולא מן העשוי – ‘you shall make [the sukkah] rather than simply use something ready-made’.
In terms of Jewish thought, what I believe this principle means is that even in a situation where all the elements of a house are in place, a house does not become a home – even a temporary home – merely because of what it looks like. Instead, it becomes a home when time and energy is invested towards the act of ‘making’ (תעשה), which in almost every instance requires some form – even a symbolic form – of deconstruction and reconstruction.
Ultimately, it is possible to find a house that is ready to move into. But for a house to become a home, one has to ‘make’ that house into a home.
×
×