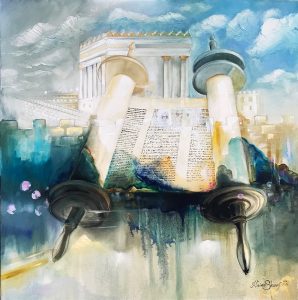 A curious teaching of Resh Lakish is quoted in today’s daf (Sukkah 20a) where we are told that, ‘initially, when Torah was forgotten from [the people of] Israel, Ezra ascended from Babylon and gave it a proper foundation. When it was again forgotten, Hillel the Babylonian ascended [to Israel] and gave it a proper foundation. [And] when it was again forgotten, Rabbi Chiya and his sons ascended and gave it a proper foundation.’
Significantly, some explain this ‘forgetting’ literally in terms of certain halachot ceasing to be known. However, as Rabbi Ben-Zion Uziel explains (see ‘Michmanei Uziel’ Vol. 3 p. 284), ‘this need not be understood literally. Instead, what was forgotten was the honour, authority and study of Torah within [the people of] Israel…as expressed by the Sanhedrin, which was the continuation of the chain of tradition from the time of Moshe.’
Given this explanation, what we are being taught in our daf is that while there were periods in Jewish history when the honour, authority and study of Torah fell from the pedestal of national Jewish consciousness, it was restored through the programs, teaching and rulings of Ezra, Hillel and R’ Chiya and given a proper ‘foundation’ once again.
Interestingly, we are taught in each of these cases that the individual ‘ascended’ from Babylon, and though there are a variety of reasons why the Talmud Bavli might have wished to emphasise this point, I believe that a further lesson can be learnt from here that sometimes it takes an outsider to help us undergo a change of perspective about ideas and practices whose purpose and value we have come to overlook or forget. At times this can be a physical outsider, while at other times it can be people who are not or who have not been – until that point – considered to be part of the ‘institution’. But no matter who that person is, what is clear from R’ Uziel’s explanation is that there is a deep association between the honour of Torah and the type of Torah rulings promulgated within the Jewish people which help the people honour the Torah.
Today, I feel that we are currently in a period of significant ‘forgetfulness’ in terms of the honour, authority and study of Torah. True, there are many who study Torah, and equally true is the fact that Torah teachings and texts have never been more accessible than they are today. Still, notwithstanding the fact that we no longer have a Sanhedrin, there is a paucity of Torah rulings promulgated within the Jewish people which help the people honour to Torah.
Yet that does not mean that there is none. And it is from these ‘ascending’ stars of men and women – specifically including individuals like my dear friend R’ Yoni Rosensweig whose Torah rulings truly bring much honour to the Jewish people – that I hope and believe Torah will be given a proper foundation once again.
×
×