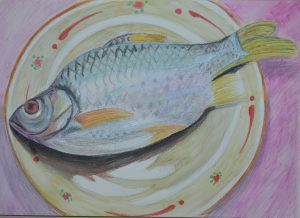 Towards the end of today’s daf (Sukkah 21b) we are taught a lesson from Rav that שיחת תלמידי חכמים צריכה לימוד – ‘the casual conversations between Torah scholars are deserving of study’, and as the Ben Ish Chai explains (see Ben Yehoyada on Sukkah 21b), it is particularly noteworthy that Rav is the author of this teaching since we have an example elsewhere in the Gemara where a casual remark of Rav led to the clarification of a significant halachic ruling.

In terms of the debate, the Gemara (Chullin 111b) teaches that: ‘In a situation where fish was placed on a [hot] meaty plate, Rav said, “it is forbidden to eat [the fish] with kutach (a dairy dip)” while Shmuel said, “it is permitted to eat [the fish] with kutach”.’ This is because, as the Gemara then proceeds to explain, Rav was of the opinion that the fish absorbs meat flavour from the hot plate, whereas Shmuel was of the opinion that the flavour absorbed by the fish is secondary meat flavour.

As the Ben Ish Chai explains, though the Gemara presents Rav’s remark as if it was taught in a formal capacity, this was not actually the case. Instead, as Gemara Chullin proceeds to explain, this statement was derived from something said by Rav when he went to visit his grandson Rav Shimi bar Chiya.

While at the house of his grandson, we are told that Rav had an eye-ache, and so in order to ease his discomfort, his family prepared an eye ointment for him on a plate. Then, sometime later, they served him hot food on the same plate (which had been rinsed in-between). Yet, notwithstanding this, Rav remarked that he could taste the flavour of the ointment in the food that he was eating – from which it was inferred that Rav was of the opinion that flavour can be imparted from hot plates.

As the Ben Ish Chai explains, ‘what we see from here is that from a casual conversation of Rav, a significant halacha was derived, and consequently, it is meaningful that Rav is the one who taught this idea [that the casual conversations between Torah scholars are deserving of study] because he himself had seen how this is so.’