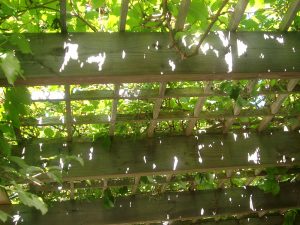 Today’s daf (Sukkah 22) opens with a Mishna (Sukkah 2:2) stating that ‘a sukkah whose shade exceeds its sunlight is kosher’. As the Gemara (Sukkah 22b) observes, ‘this implies that a sukkah which has equal amounts of shade and sunlight is invalid.’
However, as the Gemara then proceeds to explain, this seems to conflict with a deduction from an earlier Mishna (Sukkah 1:1) where we are taught that ‘a sukkah whose sunlight exceeds its shade is invalid’ – which implies that a sukkah which has equal amounts of sunlight and shade is valid’!
The Gemara resolves this conflict by distinguishing between the balance of shade and sunlight created by the s’chach ‘above’ the sukkah – which needs to have more shade than sunlight, and the balance of sunlight and shade ‘within’ the sukkah – where even an equal amount of sunlight and shade is valid.
Considering this difference between ‘above’ and ‘within’ – or equally, ‘outside’ and ‘inside’ – it makes me think about the lives of many observant Jews who – on the ‘outside’ – may appear to have more shade (i.e. representing how they encounter and have faith in the role God plays in their lives) than sunlight (i.e. representing where they struggle to see God in their life), while on the ‘inside’, at times only have an equal amount of shade and sunlight (i.e. they feel that they encounter and have faith in God in an equal measure to when they struggle to see God in their life) – and at times even less.
Unfortunately, people often imagine that they know the inside of an observant Jew because they can see the outside, and they presume that since that individual appears to be someone of faith, that they don’t struggle with faith.
But like a sukkah whose light spreads further on the inside notwithstanding the greater s’chach on the outside, so too, those who are religiously observant often find that their spiritual inner selves are not a mirror image of their outer selves. And from today’s daf we learn that when this occurs, this does not make those people weak or inconsistent or hypocritical. Instead, it makes them normal.
×
×