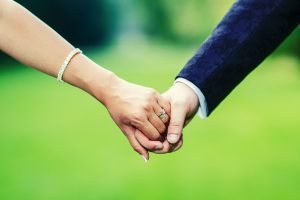 Today’s daf (Sukkah 25b) informs us that a bridegroom is exempt from the mitzvah of sukkah either, as Rava explains, because a bride and groom would feel uncomfortable being physically intimate in a sukkah which is relatively open, or as Abaye explains, because the openness of the sukkah would mean that their guests would come to visit them at times when they would want their privacy. As Rav Zeira explains, in his week of marriage ‘I ate in the sukkah and rejoiced in the marriage residence’ – meaning that he struck a balance between being in the sukkah and being with his new bride within their new residence.
Yet while this exemption applies to a newly married couple, it does not apply to a ‘seasoned’ married couple. Given this, how should a married couple (or, to be technical, a married man) balance the mitzvah of sukkah with the duty/mitzvah of intimacy? And is a man exempt from sleeping in a sukkah if he and/or his wife would rather he sleep inside even at a time when they are not able to be intimate?
Various commentaries emphasize that ideally one should build a sukkah in a manner that enables both husband and wife to sleep there. However, even if this were to be done, it is possible that the wife might not wish to sleep there, and it is also possible that other children/guests may want to sleep in the sukkah.
Given this, the Rema (Shulchan Aruch Orach Chaim 639:2) rules that if a husband and wife cannot sleep in their normal manner in a sukkah – meaning whether together or separate – then the husband is exempt from sleeping in the sukkah, whereas the Mishna Berura (OC 639:18) quotes the Gra and the Magen Avraham who rule that this exemption only applies where the discomfort of sleeping apart is heightened such as when they would expect to have relations. Yet while there is some disagreement on this topic, as Rabbi Melamed explains in his Peninei Halacha one can rely on the more lenient view of the Rema.
Ultimately, situations can arise when the duties of presence, affection and intimacy in marriage can seemingly conflict with other mitzvah obligations. Where possible, one should endeavour – as did Rav Zeira – to strike a balance between the two. However, in those situations where it is not possible, the Rema comes to emphasize the importance of fulfilling both the emotional and the physical needs of a couple in the spirit of תשבו בעין תדורו- ‘dwell [in the sukkah] in the way that you [normally] live’.
×
×