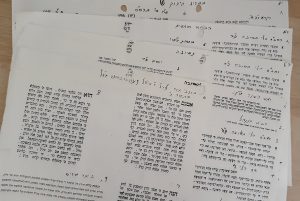 Sadly, my (primary) teacher Dayan Gershon Lopian* zt’l passed away 7 years ago, and for those who were blessed to know him, his absence continues to be sharply felt. Still, as I wrote some years ago, notwithstanding his petira (death) I believe that I am still able to fulfil the mitzvah of להקביל פני רבו ברגל towards this great teacher of mine and of so many others.

Dr. Haym Soloveitchik famously observed in his essay titled ‘Rupture and Reconstruction: The Transformation of Contemporary Orthodoxy’ that there are two sources of Jewish practice – a textual tradition (ie. one that originates from books), and a mimetic tradition (ie. one that originates from modelling what one observes from parents and teachers), and while prior generations relied more heavily on mimetic traditions, much of contemporary orthodoxy relies almost exclusively on textual traditions.

Personally, there are things that I do based on the texts I have studied, but there are also things that I do based on the practices I have observed, and among these is how I shake the Arba Minim (Four Species) on Sukkot. This is because, as a teenager, I would watch Dayan Lopian zt’l as he shook his Arba Minim during Hallel on Sukkot and I would model what he did, and like so many things that we wish to remember, I stored a mental video of his actions for ‘future viewing’. And the reason why I mention this is in relation to today’s daf is because whenever Sukkot comes around and I shake my Arba Minim, this video is replayed in my mind, I see the face of my teacher, and when I do, I ‘greet the face of my teacher on the festival’.

Significantly, this is not limited to Sukkot, and when it comes to other Chagim, I often review the shiurim which he delivered from the handouts that I still have in my possession**, and when I do so, I not only hear his voice but also – in some way or another – greet his face.

As we know, the teacher-student relationship is a major running theme in the Gemara, yet today, fewer and fewer people have these deep and rich relationships with teachers who have been a regular presence in their lives over many years. For some, this is because they have made the choice to prioritize learning from books over learning from people, while for others, it is because they never even had the chance to have such a relationship with a teacher.

But what we learn from today’s daf is that we all need teachers, and that the teacher-student relationship is strengthened through teachers being present for their students, and by students being present around their teachers.

** The accompanying picture is from handouts from a number of Dayan Lopian’s shiurim. Today, handouts can be made with a few clicks on a computer, but when I was younger (both as a student and as a teacher), handouts required possessing the sefarim that you were quoting from, photocopying from them, sticking them in order, and writing titles for each. Admittedly, there are many pro’s to today’s method, but there are also some con’s as well.