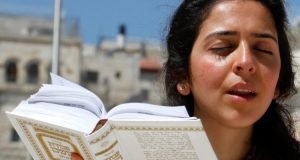 The Mishna (Sukkah 2:8) in today’s daf (Sukkah 28a) rules that ‘a קטן (minor) who does not need his mother is [rabbinically] obligated in [the mitzvah of] Sukkah’, which then prompts the Gemara (Sukkah 28b) to explore what is meant by the phrase ‘who does not need his mother’?
According to the academy of Rabbi Yannai, this refers to a young boy who is independently able to clean up after himself having defecated. While according to Rabbi Shimon, this refers to a young boy who – upon waking up from his sleep – does not immediately cry out !אמא – ‘Mother!’ (nb. as the Piskei Tosfot on Massechet Chagigah explains, this definition is due to the fact that the core mitzvah of sukkah is sleeping in the sukkah. Given this, a child who – upon having a disturbed night’s sleep – doesn’t cry out for their mother should ideally sleep in the sukkah).
However, the Gemara then challenges Rabbi Shimon’s definition because גדולים נמי קרו – ‘older people also cry out [for their mother]!’. Consequently, the Gemara suggests that Rabbi Shimon’s teaching can be explained to mean that it refers to a young boy who – upon waking up from his sleep – does not repeatedly cry outאמא! אמא! – ‘Mother! Mother!’, meaning that it refers to a child who does not just want their mother’s presence (and thus cries out for her once), since many older people also want their mother’s presence, but instead, is overcome with a feeling that they completely need her presence (and thus cries out for her repeatedly).
Reflecting on this teaching, Rabbi Yissachar Dov Eicharn explains in his ‘Sefer Pi Kohen: Peninim B’Avodat HaShem’ p. 272 that a connection can be made between this idea and a teaching found in Brachot 32b where we are taught: ‘Rabbi Chama the son of Rabbi Chanina said: “If someone sees that they have prayed and have not been answered, they should go back and pray again, as it says, ‘Hope to Hashem, strengthen yourself and He will give you courage, and hope to Hashem’” (Tehillim 27:14).’ As Rabbi Eicharn explains, this is because by repeatedly praying to God, we show that we truly need God – just like the child who repeatedly calls out to their mother in their hour of need illustrates that they truly need their mother.
Sadly, as pointed out by Rav Soloveitchik in his essay ‘Redemption, Prayer, Talmud Torah’, too many of us fail to acknowledge our needs and this is one of the reasons why so many of us struggle with prayer. However, ‘for Judaism, need-awareness constitutes part of the definition of human existence.’
Ultimately, while many of us should be able to get through a night’s sleep without waking up and crying for our parents, to be human is to have needs, and while each of us need others on occasion, all of us need God. As such, we should harness the power of prayer to call out to God and, through doing so, communicate our needs to our Creator.
×
×