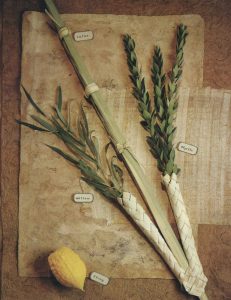 We were previously taught that a dry lulav is invalid because it is not הדר – ‘beautiful’ (see Sukkah 30a). However, today’s daf (Sukkah 31b) relates how there was a period when the residents of large cities were unable to procure fresh lulavim and these residents would bequeath their lulavim to the next generation, such that grandchildren would use the dry lulavim of their grandparents. Nevertheless, the Sages ruled that this cannot be used as halachic proof as it was done at a time of pressing need (שעת הדחק).
Significantly, some commentaries such as the Ra’avad (see his remarks on Rambam’s Hilchot Lulav 8:1) explain the ruling of the Sages to mean that what was done was merely to avoid forgetting the mitzvah, but such dry lulavim are invalid in all cases – and those residents of large cities did not fulfil the mitzvah. However, the Rosh (Sukkah Ch. 3 No. 14) disagrees and rules that at a time of pressing need, when other lulavim are unavailable, even a dry lulav – such as a lulav that has been passed down from grandparents to grandchildren – is valid ‘since no other options are available’.
Of course, if we were merely trying to compare a dry and fresh lulav, the dry lulav is – in almost all cases – going to be less beautiful (הדר) than the fresh lulav. Still, I have to admit that I find the idea of a community who is unable to procure fresh lulavim and who, instead, use the lulavim which have been passed down through the generations to be incredibly beautiful. In fact, it is noteworthy that the measure of respect which the Torah demands towards older generations also invokes this same word for beauty (as we are taught in Vayikra 19:32 וְהָדַרְתָּ פְּנֵי זָקֵן – which, though translated as ‘give honour to the elderly’, also means ‘and you shall be beautiful towards the elderly’).
In a world where we often measure by looks alone, there is a tendency to emphasise the beauty of the fresh and the new. However, while the laws of the Arba Minim require us to use the freshest species available, Jewish values also see and emphasise beauty in the old and in what is passed down from generation to generation.
As such, while the physical quality of הדר may have been missing in the dried lulavim that were passed through the generations, I believe a different yet equally elegant quality of הדר was reflected in these dry lulavim – namely the beauty of passing items and values down the generations, and the beauty of knowing that we are who we are and we do what we do because of those who came before us.
×
×