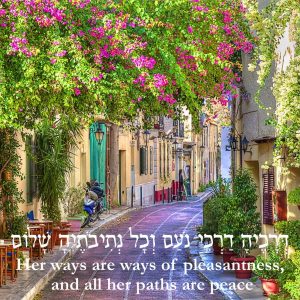 Today’s daf (Sukkah 32a) records a fascinating discussion between Ravina and Rav Ashi relating to the identity of the Lulav. Ravina asks ‘How do we know that the phrase כַּפֹּת תְּמָרִים (Vayikra 23:40) – meaning ‘the branches of palm trees’ – refers to the unopened palm frond? Perhaps it means the thorny branches of the palm tree?’
In response to this question, Abaye presents a fascinating halachic principle derived from Mishlei 3:17 which teaches us דְּרָכֶיהָ דַרְכֵי נֹעַם וְכָל נְתִיבֹתֶיהָ שָׁלוֹם – ‘Her ways are ways of pleasantness, and all her paths are peace’ – namely that the Torah and its mitzvot are meant to be pleasant. Consequently, given the two possible ways of explaining כַּפֹּת תְּמָרִים, he explains that it is clear that the Torah would wish that we avoid using the branch with thorns, and that we use the smoother palm frond.
Significantly, this same verse from Mishlei is also invoked by Abaye in Sukkah 32b to identify the עֲנַף עֵץ עָבֹת (Vayikra 23:40) – meaning ‘the shoot of a plaited tree’. This is because while this term could refer to the myrtle, it could also refer to the oleander plant. However, given that the oleander plant has sharper leaves, Abaye explains that the Torah must be referring to the myrtle.
But the application of Mishlei 3:17 does not end with the Talmudic discussion of the lulav and the myrtle. In fact, this verse has been invoked by many poskim (halachic decisors) either as part of their own halachic decision-making process (for some good examples, see Responsa Radbaz no. 1052 & Mishpetei Uziel 5724 No. 4), or as a message to future halachic decision-makers. As the Netziv writes in his final line of a responsum, ‘May God protect us from the pitfalls of making decisions that are too strict, for we say about the Torah that “Her ways are ways of pleasantness etc.”’ (Meishiv Davar no. 1:30).
In conclusion, there are times when the texts and logic of Jewish law can be interpreted in multiple ways. Yet when this occurs, the ethic expressed in Mishlei 3:17 becomes a final arbiter for we believe, as the Ralbag explains on that verse, that ‘the ways of the Torah are ways which should be very pleasant and sweet to a person. The [Torah] should not be a burden on any individual or cause them difficulties. Instead, anything that stems from… the mitzvot should be pleasant and desirous in their nature’.
×
×