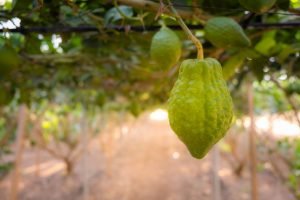 A major debate relating to the intersection of Shemitta (the Sabbatical year) and Sukkot is recorded in today’s (Sukkah 39b) daf.
In terms of an Etrog used during the year of shemitta (nb. for those unaware, we will be starting a shemitta year on Rosh Hashanah), almost its entire growth occurs in the 6th – as opposed to the 7th – year. As such, like the lulav, we would imagine that an etrog used in a shemitta year does not retain shemitta sanctity.
However, the answer to this question is actually the subject of a major Tanaitic debate whether an Etrog’s shemitta status is determined by when it was picked (לקיטה), or by when much of its early growth occurred (חנטה). As implied in the Mishna in today’s daf (39a) and confirmed by the scholars in Usha (see Sukkah 40a), we follow לקיטה – ‘when it was picked’. However, today’s daf also quotes Mishna Bikkurim 2:6 from which it is derived that both Rabban Gamliel and Rabbi Eliezer rule that we follow חנטה – ‘when much of its early growth occurred’.
Significantly, this debate continued into the period of the Rishonim, with some ruling according to ‘when much of its early growth occurred’, and others according to ‘when it was picked’. Given this, we are strict according to both opinions (see R’ Melamed’s Peninei Halacha: Shevi’it V’Yovel p. 65).
Interestingly, the Rabbis of the Midrash (Vayikra Rabbah 30:14) compare each of the Arba Minim (Four Species) to different limbs or organs of the body, and they explain that the Etrog is comparable to the heart. Based on this, while reflecting on the debate in today’s daf, it is possible to suggest that veiled within our debate about the Etrog is a further debate about the emotional, intellectual and spiritual development of humanity.
As we know, some are of the opinion that our heart – i.e. our thoughts and feelings – are primarily determined by what occurs during the early years of our life while we ‘grow’ as children in our parents’ home. At the same time, there are others who emphasise that our heart is primarily determined by what we do as independent adults once we’ve been ‘plucked’ and separated from the tree that is our parents’ home. I believe that in general, like the Etrog, we adopt both opinions and recognise that both our early years and our adult choices are powerful forces in what we feel, think and do.
Ultimately, who we are is determined both by where we come from and by what we do – both our past, and our present. But while the past cannot be changed, how we look at it, how we channel it, and what we do in the present – can.
×
×