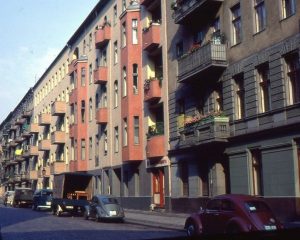 Today’s daf (Sukkah 4a) continues its discussion about the permitted height of the Sukkah which, as Mishna Sukkah 1:1 previously taught, cannot be taller than 20 amot (approx. 10 metres), and must be at least 10 tefachim (approx. 1 metre). Beyond this, our daf also rules that in a situation where the sukkah is exactly 10 tefachim high, the s’chach should not be protruding downwards into the 10 tefachim, i.e. there needs to be at least 10 tefachim of space to allow those present to ‘dwell’ therein.

Of course, in most situations, most people would not seek to build a 10-tefachim-tall sukkah. Yet it is in this spirit that I would like to share an inspirational story about a family who did so under incredibly dangerous conditions. Here is the story, titled ‘The Maximum from the Minimum’ as recorded by Rabbi Paysach Krohn (Reflections of the Maggid pp. 140-142):

‘In the 1930’s, the Jakobovitses lived in the Neuklon section of Berlin. Their father, Rav Yoel, was a noted talmid chacham and a respected dayan (rabbinical judge). Whenever the family had to relocate to a new apartment, Rav Yoel would inspect the balcony to see if there were any impediments to a kosher succah such as a balcony directly overhead, or tree branches covering his own balcony. This would invalidate the succah, for the s’chach must lie directly beneath unobstructed sky.

Furthermore, Rabbi Jakobovits always had a clause inserted in the lease specifying that he could build a succah on the balcony. Although he knew that German landlords would not be keen on having a visible Jewish object such as a succah built on their property, he also knew their mentality: Germans would not renege on a signed agreement. A contract was a contract.

In October 1938, virulent storm winds of anti-Semitism were rampant. Every day Jews would hear about their brothers and sisters being carted off to the concentration camps in Dachau and Buchenwald. At that time the general consensus among Jews was that their brethren were merely being imprisoned; no one could have imagined the horrifying atrocities that were in store.

Nazi storm troopers roamed the streets of Berlin and Jews could be dragged off at any time to be sent away. However, Succot was approaching and it was unthinkable for Rabbi Jakobovits to eat his Yom Tov meals outside a succah. His balcony on the third floor faced the street below and was glaringly visible to all passersby. If Heaven forbid Nazi soldiers saw the succah, they could charge upstairs, ransack the premises, and cart the family off to police headquarters – or worse.

Rav Yoel considered his options. He closed his eyes in thought and then had an idea. He measured the height of the surrounding wall of the balcony. It was a little more than 44 inches – approximately 11 tefachim. The minimum permissible height of a succah is 10 tefachim, approximately 40 inches. Rav Yoel could build a succah ten tefachim high, cover it with s’chach and still be below the 44 inch height of the wall. No one would be able to see his succah from the street.

The Jakobovitses were concerned that their neighbours on higher floors might inform Nazi authorities about the succah, but Rav Yoel was willing to take that perilous chance. Aside from his determination to fulfil the mitzvah, he had always been on good terms with the upstairs neighbours. He prayed they would not betray him.

His prayers were answered. Rav Yoel indeed built a succah that was all of 10 tefachim high, and today, more than sixty years later, Rabbi Shlomo Jakobovits recalls with pride how his family crawled on their knees into that tiny succah on the balcony on Elizabeth Ulfer Street and ate all their meals sitting on pillows, observing Hashem’s commandment in an unforgettable manner.’