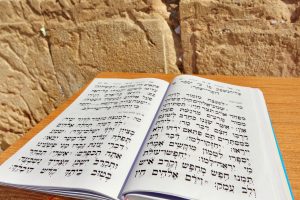 Yesterday I received a message about a very dear friend who was recently in hospital for a relatively simple procedure but who has just discovered that he is very unwell. This is someone I have known for many years who, beyond everything else, was not only a daily chavruta of mine, but who is – quite literally – one of the most genuine, kindest and most righteous people you will meet (as confirmed by the fact that were you to tell him that this is what you think of him, he would consider it absurd and say that he is just a very simple Jew who simply tries to do what is right). Last night I participated in an online Tehillim gathering for his refuah, and from the remarks shared, it was clear that how I feel about this dear friend is equally shared by all those others who are privileged to know him.
In light of this, when I opened daf yomi today I was somewhat nervous. This is because I sensed from yesterday’s discussion that our daf today – Sukkah 44 – would also be technical in terms of its discussion of the Lulav and the Aravot, and based on how my heart is feeling, I was not sure if I could get into a technical groove. And then, embedded in today’s daf, I felt a pull – as I feel everyday to whichever topic I eventually choose to write about; a pull which, somehow, speaks about my dear friend.
The Gemara relates how Aivu was standing with Rabbi Elazar bar Tzadok when a particular man – an owner of villages and vineyards and olive trees – asked whether it was proper, during the Shemitta year, for the inhabitants of the villages to hoe the vineyards and reap payment for doing so by eating from the olive trees. Rabbi Elazar answered him by explaining that such actions were improper. Then, once the man departed, Rabbi Elazar remarked to Aivu that: ‘I have already lived in this land for forty years, and I have never seen a man go in the paths of righteousness as this man’.
The obvious question here is what did this man do that is so righteous? Where is the righteousness in asking a halachic question and getting an answer? To which there are those who have suggested that what made this man special is how he did not delay in asking his question but, upon seeing a problem, he wanted to do the right thing immediately, while others suggest that while such behaviour might be technically permitted, the man wished to avoid even the mere appearance of impropriety.
Admittedly, my friend does not own villages, vineyards or olive trees. In fact, just as he is modest in his ways, he is modest in how he lives. Still, when he doesn’t know whether something is right, he asks the question with no agenda other than to do the right thing, and he is someone who not only avoids anything improper, but avoids even the mere appearance of impropriety – which is why I can say with confidence that every person who participated in last night’s online Tehillim gathering, and every person who knows him, would – without a blink of an eye – trust him completely with their money and their life.
So today my daf is dedicated to the refuah of Yehuda Leib Ben Basha (יהודה לייב בן בשא). If you know him, you know that everything I have said is not an exaggeration. And if you don’t, then I still ask that you learn in his merit today because what I can say with confidence that ‘I have never seen a man go in the paths of righteousness as this man’.
×
×