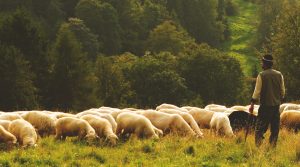 In the midst of a detailed halachic discussion in today’s daf (Sukkah 47a) concerning the possible necessity of reciting the bracha on dwelling in a Sukkah on Shemini Atzeret in the diaspora, we are told that ‘Rav Huna bar Bizma and all the great men of the generation visited a sukkah’ on that day and, though they dwelt in a sukkah, they did not recite a bracha. The Gemara then asks that ‘perhaps those Sages were of the opinion that once someone has recited the bracha on the first day of Sukkot, they need not do so again?’, to which it responds, גמירי דמאפר אתו – which is generally translated as meaning: ‘[this is not the reason that they did not recite the bracha]. Instead, I received a tradition [that these Sages] had [just] come from the fields/meadows.’ As Rashi explains, ‘they came in from the fields/meadows where their animals had been grazing and therefore had not dwelt in a sukkah throughout all the days of the Chag.’
What this means, according to Rashi, is that some of our great Sages were so busy during the week of sukkot grazing their animals that they were therefore exempt from the mitzvah of sukkah. However, many commentaries struggle to accept this explanation on face value. Not only does it not make sense that this group of rabbis were together grazing animals, but also, how was it not possible for them to construct a sukkah while the animals were grazing?
These questions prompted Rabbi Menachem Mendel Kasher (Divrei Menachem Vol. 4 p. 113) to revisit the way in which the word דמאפר is translated, and though it does often mean a field or meadow, it can also occasionally refer to a river bank or a sea shore (see Targum Yerushalmi to Shemot 2:3). On this basis, Rabbi Kasher asserts that these Sages were not busy grazing animals, but instead, had been overseas.
Moreover, he then explains that the word דמאפר may even allude to where these Sages were, because the root אפר may be hinting to אפריקא (Africa) where, to quote Rabbi Kasher, ‘already by that time there was a settlement of Jews there [in Africa] who were in contact with the Jews of the Land of Israel’ – although he then concludes that these Sages may not have necessarily been visiting Jewish communities in Africa, but may have been grazing their flocks in North Africa.
On the basis of Rabbi Kasher’s commentary, this group of Rabbis either went on a mission to help Jews in Africa, or were in Africa look after their flock. However, since the Torah refers to leaders as shepherds who tend to their flock (see Bemidbar 27:17), perhaps these two suggestions are not mutually exclusive. Instead, extending the interpretations offered by Rabbi Kasher, I would like to suggest that these Sages went to Africa to visit with and tend to the needs of Jews – just like a shepherd travel to tend to the needs of their flock.
Explained this way, it is now understandable which mitzvah these Rabbis were involved with that exempted them from the mitzvah of Sukkah. Yet beyond this explanation is also a powerful message – that instead of great leaders staying at home and enjoying their sukkah experience, they travelled far and gave up on their personal spiritual comforts to show their care and concern for their fellow Jews.
Today, there are still many Jews in far flung places – including parts of Africa – whose physical and spiritual needs require support and attention. Baruch Hashem, in addition to Chabad Shluchim, there are also a number of people who invest time and energy to support those people and those communities – although considerably more could be done for at least some of those communities.
Yet, with the advent of the internet – which became publicly accessible 30 years ago – we’ve now got digital networks that means that no Jew – anywhere in the world – who is looking for chizuk, learning and guidance should feel that they are like a sheep without a shepherd. Yet, unfortunately, that is not the case, and there are many Jews who feel alone and – as a result of their aloneness – slowly ebb away from their Judaism.
Ultimately, if our Sages were prepared to ‘give up’ on their sukkot experience to assist other Jews, we too should be prepared to ‘give up’ on some of the things we do to assist and connect with other Jews (as Rav Moshe Feinstein rules, just as we must give ma’aser, 10%, of our money to charity, so too, we should give 10% of our time), and we should do so in order that no Jew – anywhere in the world – who is looking for chizuk, learning and guidance should feel that they are like a sheep without a shepherd.
×
×