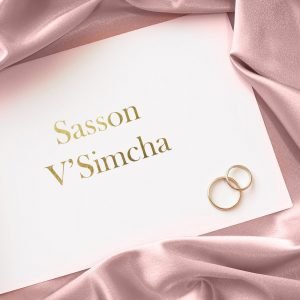 While numerous words are used in Tanach and our Tefillot to describe the feelings of joy and happiness, much ink has been spilt in trying to distinguish between the deep meaning of the words שמחה (simcha) and ששון (sasson).
In today’s daf (Sukkah 48b), we read a dialogue between two individuals – one called simcha and one called sasson. These two individuals had previously rejected Torah traditions but still sought to understand the difference between simcha and sasson. Interestingly, as the Maharsha explains, this dialogue was recorded in a spirit of contempt in order to highlight the futility of understanding the meaning of Torah words and teachings without the insights provided from the Torah Sheb’al Peh (Oral Tradition).
Yet beyond the answers suggested by these two individuals in our daf, various commentaries were nevertheless drawn to this discussion to try and explain the deep meaning of simcha and sasson based on their understanding of the Torah Sheb’al Peh, and though space does not allow me to summarise each of these different explanations, I would like to record one of these as offered by the mystic Rabbi Yitzchak Isaac Chaver (1789-1852) in his Pitchei Sha’arim (Netiv Partzuf section 24, in note 32 of his Beit Netivot).
Admittedly, I do not claim to understand all that Rabbi Chaver says about this concept (or the many other concepts he addresses in his sefer), while even some of the dimensions of his explanation which I think I do understand I will not attempt to explain here because they require considerably more time and space to explain them appropriately. Still, the essence of Rabbi Chaver’s thesis is that simcha is the joy one feels upon accomplishing something meaningful having worked hard to achieve that goal, while sasson is the joy one feels upon achieving or experiencing something that did not require significant effort (as Rabbi Chaver says, this is comparable to finding a valuable object effortlessly).
Clearly this insight has many different applications, of which one – as presented by Rabbi Chaver himself – is that simcha refers to the joy we experience in Olam HaBa (which comes from the effort we invested in doing good deeds in this world), while sasson refers to the joy we will experience in the Messianic Age.
A further application of this distinction relates to the fact that the words simcha and sasson feature in the sheva brachot recited at a wedding, and from here we can learn that while marriage can provide ‘sasson joy’ through simply being together, there is a higher level of joy that can come from a marriage – namely ‘simcha joy’ – but such joy requires significant effort from both parties.
Today, there is a prevalent false belief – not only in the realm of relationships but in many other dimensions of life as well – that many of life’s great pleasures and rewards can be achieved effortlessly – and when this doesn’t occur, people either question their worth or simply give up. Unfortunately, such people merely chase sasson. Yet sasson, without simcha, is fleeting and incomplete.
Overall, we need to know that, as a result of God’s blessings, life will bring us moments of sasson. But we also need to know that for life to bring us opportunities of simcha as well, it will depend on what we do, and the effort we invest, to earn that outcome.
×
×