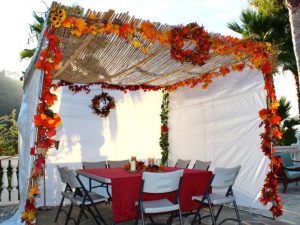 We are taught in the Mishna (Sukkah 5:6) in today’s daf (Sukkah 55b) that a total of seventy bulls were offered as sacrifices in the Temple over Sukkot, and this fact then prompted Rabbi Elazar to ask: ‘To what do these seventy bulls correspond?’, which he then answers by explaining that they correspond ‘to the seventy nations.’ As Rashi explains, ‘seventy bulls were offered on Sukkot corresponding to the seventy nations – to atone for them so that rain shall fall throughout the world. This is because it is on Sukkot when we are judged for the water.’ Given this, Rabbi Yochanan then proceeds to observe, ‘woe to the idolators, for they had a loss and they do not know what they have lost. When the Temple existed, the altar atoned for them; but now, who will atone for them?’.
Clearly, underpinning these observations is the sentiment that the Beit HaMikdash was not only the beacon for the Jewish people but for all of humanity (as evident from Melachim I 8:45 & Yeshayah 56:7), and that it is specifically Sukkot that is the festival which affirms the universal message of the Jewish people (as evident from Zechariah 14:16). But why specifically Sukkot?
This question is addressed by Rabbi Shimon Gershon Rosenberg (1949-2007), better known by the acronym ‘Rabbi Shagar’, who explains that the festival of Sukkot contains two seemingly conflicting messages: In terms of the Sukkah itself, it represents the structure in which we placed our trust in God as we journeyed in the wilderness – outside of the land of Israel – for a period of forty years, while Sukkot – as a festival – is also centred on the harvest and is a celebration of the bounty of the land of Israel. Understood this way, the sukkah is ‘a diasporic, temporary dwelling that is also an expression of the Land of Israel’s harvest festival’ which incorporated both ‘the exilic and the rooted’ (Faith Shattered and Restored p. 184), and that it is from the lessons we can draw from Sukkot that we can understand and find a healthy balance between nationalism and universalism.
As Rav Shagar proceeds to explain, ‘both nationalism and universalism are necessary. Nationalism is rootedness in what one is, in an identity unique to the nation and the individual. However, if it is not to turn rigid and callous, it must be tempered by universalism… [which] subverts the preference for one national identity over another… This is because universalism is the shared dimension, the common grounds for all of humankind. Put in religious terms, it is where we encounter the image of God’ (ibid. pp. 185-6).
Understood this way, ‘it is precisely the diasporic nature of the sukkah – the very sukkah in which God commanded us to dwell when we emerged from Egypt… where one surrenders one’s power and puts his trust in God, that can facilitate an all-encompassing divine influx that includes the offering of seventy bulls for the welfare of the world’s nations’ (ibid. p. 185).
×
×