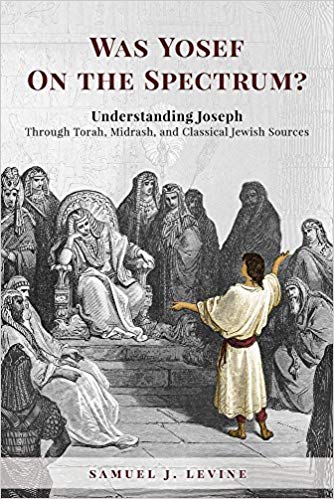 WAS YOSEF ON THE SPECTRUM? Understanding Joseph through Torah, Midrash and Classical Jewish Sources

In general, I am not drawn to Torah commentaries that seek to frame biblical personalities in the language of today, at the cost of understanding their words and actions as expressed by the language of the Torah. Given this, when I received a copy of Samuel J. Levine’s 141-page book titled ‘Was Yosef on the Spectrum?’, who is a Professor of Law and who also has rabbinical ordination from Yeshiva University,  I have to say that I opened the book as a very cautious reader.

However, I then read the numerous approbations on the opening page of ‘Was Yosef on the Spectrum?’ from scholars including Rabbi Yitzchok Adlerstein, Rabbi Menachem Mendel Blachman, and Dr. Erica Brown. Though each drew their own conclusion – with some being more convinced than others with some of Professor Levine’s conclusions – their knowledge of the author and their remarks about his scholarship communicated that this is a book written with a profound regard for the Torah’s words and teachings and considerable respect and admiration for Yosef, and so I read on with a (slightly) more open mind.

In simple terms, ‘Was Yosef on the Spectrum?’ is a peirush (commentary) on the Parshiot of Yosef (Vayeshev, Miketz, Vayigash & Vayechi). Yet, unlike all previous commentaries that offer individual insights on individual verses and episodes ‘without providing a cohesive understanding of the story as a whole and the puzzling ways Yosef interacts with others’, this book ‘attempts to achieve a coherent and cohesive reading of the story’ while offering ‘a plausible understanding of Yosef’s behaviours towards others and those of others towards him’ which is, according to Professor Levine, that ‘the biblical text paints a portrait of Yosef consistent with an individual on the autism spectrum’.

As the author explains in a footnote early on in the book, ‘it should be emphasised that this portrait of Yosef is not a simplistic and ahistorical labelling based on a superficial reading of a few events’.  Instead, it ‘represents a carefully documented understanding of Yosef, based on dozens of statements in the biblical text and hundreds of comments in classical Jewish sources’.

Over the ensuing 11 chapters Professor Levine interweaves a close reading of the Torah text with the insights of classic Torah commentaries along with observations about the behaviour and development of those on the autism spectrum. As would be expected, some of the insights and explanations are more compelling than others. Nevertheless, through reading this delightful book – which is considerably enriched by the detailed footnotes provided by the author – I gained a much deeper understanding of the emotional challenges faced by Yosef, I was sensitized to the many different and at times conflicting messages that emerge from the Torah text and Midrashic readings in the Yosef stories, and I took pause to consider on a very sincere and very real level the struggles and difficulties faced by those on the autism spectrum.

In terms of the insights found in ‘Was Yosef on the Spectrum?’ here are just a few examples from the opening chapters relating to Parshat Vayeshev:

As can be seen in these examples – as well as the many others found in ‘Was Yosef on the Spectrum?’, Professor Levine pays close attention to the Torah text and the insights of classical Torah commentaries, and though somewhat cautious in labelling or ‘diagnosing’ Yosef, he makes a strong and consistent case that Yosef was on the spectrum.

As mentioned, I am not drawn to Torah commentaries that seek to frame biblical personalities in the language of today at the cost of understanding their words and actions as expressed by the language of the Torah. Yet what I found in ‘Was Yosef on the Spectrum?’ was a considered and refreshing reading of the Yosef stories showing sensitivity and understanding towards the Torah text, and towards Yosef specifically.

For some people, this book is a game-changer in terms of how they relate to Yosef, while for others, it may just raise questions which they may wish to address in other ways. Personally, I am sufficiently taken by a sufficient number of insights that I will never look at Yosef in the same way again. Still, whether you agree with some, all or none of Professor Levine’s reading, ‘Was Yosef on the Spectrum?’ sensitises the reader to many fascinating elements of the Yosef stories and serves to increase awareness and sensitivity about the challenges faced by those on the autism spectrum.

To purchase a copy of this book, click here.