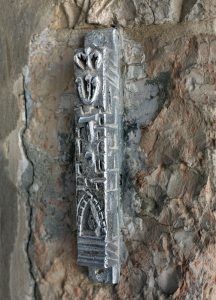 A central theme in the first chapter of Massechet Yoma has been how the Kohen Gadol was sequestered in the Parhedrin chamber within the Temple complex for the seven days prior to Yom Kippur, and in today’s daf (Yoma 10a) the Gemara cites a Beraita discussing whether this chamber necessitated having a mezuzah affixed to its door.
At least according to Torah law, one of the qualifications requiring the affixing of a mezuzah on a house is that someone live there, and since the Kohen Gadol lived in the Parhedrin chamber for the week prior to Yom Kippur, the first opinion (Tana Kamma) in the Beraita rules that the Parhedrin chamber requires a mezuzah.
However, the Beraita then informs us that Rabbi Yehuda took a different view, arguing that there were several chambers in the Temple which similarly served as temporary dwelling places but which did not have a mezuzah. Therefore, here too, since the Kohen Gadol only lived in the Parhedrin Chamber for 7 days, it did not require a mezuzah – at least according to Torah law. However, Rabbi Yehuda did concede that the Sages decreed that a mezuzah be fixed there anyway.
We are then told (in Yoma 10b) that this dispute is understood differently by Abaye and Rava. According to Abaye, both the Tana Kamma and Rabbi Yehuda are of the opinion that a mezuzah is biblically required for the 7 days of residence of the Kohen Gadol in the Parhedrin Chamber, but disagree about the nature of its requirement for the rest of the year. According to the Tana Kamma, a mezuzah is biblically required for the rest of the year because the chamber was a place of residence for the Kohen Gadol for these 7 days, while according to Rabbi Yehuda, it was only rabbinically required for the remaining days of the year in order to give the Parhedrin Chamber a ‘homely’ look, since some may think that when the Kohen Gadol was in this building during his 7 days – notwithstanding the fact that it bore a mezuzah – he was not in a home but, instead, in a form of prison.
A different reading is offered by Rava who explains that the Tana Kamma considered the forced residence of the Kohen Gadol in the Parhedrin Chamber to give it the status of a home and thereby biblically requiring a mezuzah throughout the year, while Rabbi Yehuda did not consider it a residence and did not even think that it required a mezuzah even during these 7 days. However, given the concern that the chamber not be viewed as a prison, he explained that the Sages decreed that a mezuzah be fixed there.
Personally, I find the concern of שלא יאמרו כהן גדול חבוש בבית האסורין – that the people do not say that the Kohen Gadol is restrained in a prison – to be fascinating, because whether or not many people actually made such an association, Rabbi Yehuda was of the opinion that the possibility of them doing so was of sufficient concern and sensitivity to justify the Sages decreeing that a mezuzah be fixed simply for appearance’s sake.
From here we learn how important it is for all of us, and especially our spiritual leaders, to live according to the morals that they represent, and to avoid doing things, avoid associations with, and avoid places where their moral integrity may be seriously questioned.
×
×