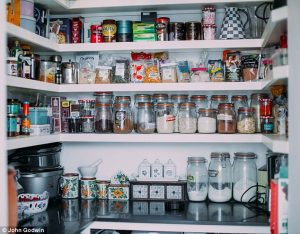 Today’s daf (Yoma 11a) continues with the theme of mezuzah and discusses the types of buildings that do and do not require a mezuzah. For example, we are told that a storage house is exempt from requiring a mezuzah because it does not fall under the category of being ביתך – your “home” (Devarim 6:9).
However, what is less clear is how we treat storage cupboards
and rooms within houses – meaning large cupboards (smaller than 4 amot square) or small rooms (larger than 4 amot square) such as an old-style pantry/larder where people do not dwell but which are still used and are part of a house (nb. my grandparents had a larder where my grandmother kept all the food including the most important tin for a young child – namely the tin containing her wonderful homemade biscuits).
In general, contemporary halachic handbooks – and especially those dealing with the laws of Mezuzah – often respond to such cases by providing a list of those halachic authorities who rule that a mezuzah is required, a similar list of those who rule that it is not, and then conclude that one should put up mezuzah but without a bracha. However, a close look at the case of a pantry/larder can help us understand more about the laws of mezuzah as well as the halachic considerations which determine which rooms do and do not require a mezuzah.
Significantly, Rabbi Yitzchak Yaakov Weiss (Minchat Yitzchak Vol. 4 No. 92) addressed this question of a pantry/larder in 1965, and even more significant is the fact that this question was posed to him by my Rav, Dayan Gershon Lopian zt’l, while he was studying in the Sunderland Kollel.
In terms of his teshuva, Rabbi Weiss rules that there are two reasons why a pantry/larder does not require a mezuzah. Firstly, because we generally don’t enter a pantry/larder, but instead, we simply reach our hand inside to get an item. And secondly, he argues that a pantry/larder is not called a room, and thus the name of a place in a house is a determinant factor in whether it requires a mezuzah.
×
×