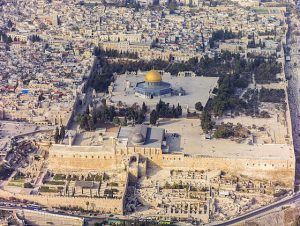 While conflicting opinions are initially presented on the topic, the conclusion from today’s daf (Yoma 12a) is that ירושלים לא נתחלקה לשבטים – literally ‘Jerusalem was not apportioned among the tribes’ – and meaning that Jerusalem is not owned by any individual tribe, party or person.
Reflecting on this teaching, Rav Aharon Lichtenstein explained in a speech which he delivered on Yom Yerushalayim in 1990* that while ‘we are used to the everyday reality of Jerusalem as a national capital, a cultural center, a city reflecting our political reality – in short, a city which belongs to us’, we still need to remember that ‘no matter how much it may seem to be in our possession, we need to perceive it as God’s city’. And given this, he makes the following three observations which remain as relevant now as they did then:
a. ‘The fact that Jerusalem belongs to no individual issues to us a call to elevate ourselves above the egotism symbolized by private acquisitiveness. We need to rise above the prevailing idea that “What is mine, is mine; and what is yours, is yours”…Thus, one aspect of Jerusalem is elevation above considerations of promoting our own personal interests, both material and spiritual.’
b. ‘We need to rise above tribal differences, sectarianism. Lest any particular group wish to claim exclusive rights to Jerusalem, we need to declare in response: Jerusalem was not given to any of the tribes. We need to rise above spiritual imperialism that comes to impose one model only. Each stone of the breastplate emphasizes a different aspect, a different tribe, and only a breastplate with all twelve stones in place is fit for use. All twelve gates surrounding the city collectively provide a fortified wall, a complete city!’
c. ‘It is true that the government is located in Jerusalem; Jerusalem is the heart of the nation. But at the same time, Jerusalem was not given over completely to mortal rule. We live in the earthly Jerusalem (Yerushalayim shel mata), but we need to remember that this physical city faces the parallel heavenly Jerusalem (Yerushalayim shel ma’ala). We need to rise above the human and national plane and reach for the plane of Divine service; we must attempt to recognize the Divine Presence in the city.’
Sadly, as he then proceeded to note, ‘the feeling of unity and completeness, of elevation above egotism driven by a value system based on kindness and uprightness, is lacking in the public consciousness. [Given] such a reality, we….are obligated to rise above egotism, sectarianism and divisiveness,’ and he then concluded this speech by stating that ‘the Holy One, Blessed be He, will return in mercy to Jerusalem when we return to Jerusalem in our hearts and souls.’
Shabbat Shalom!
* The speech was titled ‘The Messages of Jerusalem’ and it can be found at https://www.etzion.org.il/en/messages-jerusalem
×
×