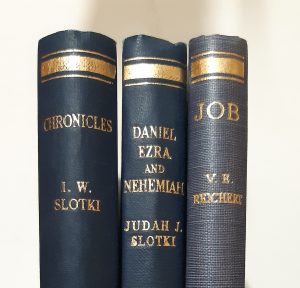 In the Mishna (Yoma 1:6) at the end of today’s daf (Yoma 18b) we are taught that as a way to keep the Kohen Gadol awake throughout the night of Yom Kippur, if he was a Torah scholar then he would deliver shiurim on matters of halacha or he would study Tanach. And if he was not a great Torah scholar, then he would either listen to dynamic shiurim delivered to him by other scholars, or he would be read sections from Tanach – and specifically, from Sefer Iyov (Job), Ezra and Divrei HaYamim (Chronicles). We are then told that Zecharia ben Kevutal – who was one such Torah scholar who had taught the Kohen Gadol on the night of Yom Kippur – once testified that, “many times I would read Sefer Daniel [to the Kohen Gadol]”.
Undoubtedly, the books of Iyov, Ezra and Divrei HaYamim (and Daniel) are fascinating. However, it is equally true to say that so are many other biblical books, which leads us to wonder why our Mishna lists these books specifically?
In addressing this point, Rashi suggests that each of these books stir the heart and therefore achieve the goal of keeping the Kohen Gadol awake. In fact, while agreeing with Rashi, the Tifferet Yisrael actually uses this Mishna to teach Rabbis about the three different types of ‘rhetoric’ that they should use to keep their audience awake and engaged – as expressed by the choice of the books Iyov, Ezra and Divrei HaYamim. Specifically, one achieves intellectual and philosophical engagement (Iyov). One achieves emotional engagement from its story of human effort and endeavour (Ezra). And one achieves the pleasure of engagement experienced when hearing real life stories about journeys, wars and other dramas faced by individuals and nations (Divrei HaYamim).
However, I did see a further explanation of this question offered by Rabbi Natan Lobert (1916-1992) in his ‘She’erit Natan’, who explains that the Kohen Gadol served the nation as both a Moshe and Aharon like figure, and who then records the tradition (mentioned in Bava Batra 14b) that Moshe wrote Sefer Iyov; that Ezra was the leading Kohen in his day (see Ezra 7:5-6), and that Ezra also wrote Divrei HaYamim (see Bava Batra 14b). [nb. while he does not say so explicitly, it is important to note that not only, by being a Kohen, was Ezra – like the Kohen Gadol – a descendant of Aharon, but also our Sages also compare Ezra to Moshe in a variety of ways as well.]
What this suggests is that these books were chosen not just due to their content, as Rashi & Tifferet Yisrael suggest, but also due to their authorship, and so by reading these books to the Kohen Gadol on the night of Yom Kippur, he would remain engaged and stay awake. Still, what Rabbi Lobert does not explain is why this should be so.
In my humble opinion I think that what Rabbi Lobert is teaching us is that by reading inspiring books to the Kohen Gadol written by the greatest of Jewish leaders which he, in some measure, represented in his day, it then gave him a sense of pride and responsibility to rise to the challenge of being the best Moshe-like, Aharon-like and Ezra-like figure for his generation.
What we learn from this is not only do educators need to think carefully about what to teach to keep their audience engaged, but also that each of us – even a Kohen Gadol on the night of Yom Kippur – need role models and heroes whose achievements inspire us about what we too can achieve.
×
×