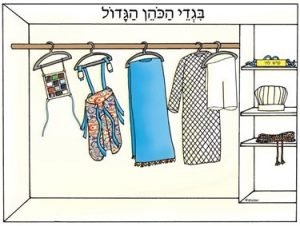 Today’s daf (Yoma 24a) records a dispute concerning whether the sacred garments worn by the Kohen Gadol on any given Yom Kippur were used again, or whether they were put away never to be used again, and reflecting on this dispute reminded me of a story that I read many years ago in ‘The Maggid Speaks’ also involving the sacred garments of a Kohen that had been put away:

“Shortly after the first World War, the municipality of a small Polish town decided to build a major highway to a neighbouring city. The roadway was to cut through a large Jewish cemetery [and] although the Jews protested bitterly, the town fathers went ahead with their plans. Thus, the Jews had no choice but to dig up the graves, and rebury the deceased in a newly designated cemetery.

The job was a gruesome one, but it had a positive aspect since it brought to light an amazing incident that had happened many years before. When they uncovered the remains of a certain R’ Naftali, the chevra kadisha (burial society) was shocked to find that he had been buried in the garments of a priest! Even more amazing was the fact that R’ Naftali’s body had not decomposed at all – it was in perfect condition, as if it had been buried that day!

Traditionally, it is known that only the bodies of the greatest tzaddikim remain complete until the time of techias hameisim (revival of the dead in the time of Mashiach). R’ Naftali must have been such a tzaddik, but who was he, and why had he been buried in such a strange shroud?

News of this finding spread quickly through the town and it remained a puzzle until some older people revealed a series of events that had occurred many years before.

R’ Naftali had been the town’s gabbai tzedakah (collector of charity). He went about his duties nobly, collecting funds from the townsfolk and then disbursing the money fairly and with integrity.

One afternoon, R’ Naftali had just come home after collecting throughout the town for a dire emergency. Almost everyone to whom he had spoken that day had responded handsomely and warmly. Indeed, he had collected at least something from almost everyone in town.

As R’ Naftali was relaxing at home with a glass of tear, a poor man knocked on his door. “Please help me,” he begged. “I just moved here and I don’t know anyone at all. I have a large family and one of my children is sick. Please take up a collection for me. I know that you are the one who does these things.”

R’ Naftali sympathized with the man, but said, “How can I ask people for money twice in one day? They will refuse me and tell me to come back some other time!”

The poor man pleaded that his family had not had a decent meal in days, and so R’ Naftali finally gave in. Embarrassed and exhausted, he went out to make his rounds again. As he had expected, people looked at him with narrowed, critical eyes. But they knew he was sincere, so they contributed again. After two hours, he came back home where his visitor thanked him profusely for his efforts.

About a half an hour later, another downtrodden man came to R’ Naftali. He, too, had a very sad story and he, too, pleaded with the gabbai tzedakah to raise some money for him.

R’ Naftali was at his wit’s end. How in the world could he collect from the same people three times in one day! People would ridicule him; they would curse him. But the pleas and the persistence of the poor man wore R’ Naftali down, and he consented. With a heavy heart he went out slowly and hesitatingly to someone whom he had always tried to avoid, but under the circumstances he felt he had no choice.

The “customer,” who had more money than he knew what to do with, happened to be the son of a wealthy man, and he was carrying on boisterously with his friends in a local tavern. He had helped R’ Naftali before, and the gabbai tzedakah hoped that he might do so again. R’ Naftali entered the tavern where the young man was hooting and hollering, while playing checkers with some of his drunken cronies, and walking up to him.

“Don’t tell me you are here collecting again?” shouted the fellow with derision.

“Yes,” said R’ Naftali softly. “I hate to bother you, but there is a poor family that needs money immediately. I need your help.”

After a short discussion with his laughing friends, the young man told R’ Naftali he had a plan for him. “How much do you need all together?”

The young drunkard howled. “I’ll give you the whole amount – but on one condition.”

A crowd gathered to listen to what they knew would be an outrageous plan. “I’ve got a set of priest’s clothing back home. I’ll run home and get them, and you put them on and march through the town leading us as the Pied Piper would lead his followers. We will play music behind you and liven up this sleepy town. When we get back, I will give you all the money you need and you won’t have to go begging to anyone else today.”

R’ Naftali turned red, and then white with embarrassment. Here was a way for him to get all the money he needed, but how could he pay such a heavy price of humiliation and degradation? On the other hand he thought, the whole matter would take only twenty or thirty minutes, and then the ordeal would be over. He would be spared the burden of going from person to person all over again, and perhaps being refused by many who had already donated twice before. Reluctantly, he agreed.

R’ Naftali marched through the main street of town dressed as a priest with a band of half-drunk, rowdy youths marching behind him, singing with a raucousness that attracted everyone’s attention. R’ Naftali’s face was beet red with shame as people peered out of their windows and thought that he had gone insane. People showered him with insults for degrading the position of gabbai tzedakah and others pelted him and his followers with eggs.

Eventually, though, the deed was done. When the “priest” and his unholy band of followers returned to the tavern, the wealthy rowdy [man] gave R’ Naftali his money and told him he could keep the priest’s clothing. He even gave the gabbai an “extra” contribution for being a “good sport.”

His head hanging in shame, R’ Naftali came back home and gave the money to the grateful man anxiously waiting there. “How can I ever thank you?” asked the man, little knowing at what great cost to R’ Naftali the money had been raised. R’ Naftali threw his uniform into a back corner of a closet and threw himself on his bed, a broken and exhausted man.

Months later the great R’ Chaim Sanzer (1793-1876), author of Divrei Chaim, came to the town. As the Sanzer Rav walked through the streets, he said to his gabbai that he smelled the fragrance of Gan Eden. He said, “There is something exceptionally holy in this town.” As they walked past the house of R’ Naftali, the rav told his shammash to knock on the door and see who lived there. The shammosh knocked and R’ Naftali came out to greet them warmly.

The Sanzer Rav told him that the fragrance of Gan Eden was coming from his house, but R’ Naftali could not understand what his great visitor meant. R’ Chaim Sanzer entered the home and sat in the dining area. Then he rose and pointed to the closet. “This is the source of the fragrance,” he said.

R’ Naftali walked to the closet and opened it. The rav peered in. He picked up the wrinkled priest’s clothing from the floor and said, “It is coming from here. Tell me the story behind these clothes.”

R’ Naftali remembered his ordeal wearing those garments and he felt the same again, but he told the story. At its conclusion R’ Chaim Sanzer said, “Because of this incident you will go directly to Gan Eden. Leave instructions to your family that when you die, you are to be buried in these clothes. The malachei chavalah (angels of destruction) will not dare touch you.”

And thus it was when the chevra Kadisha was reburying its dead, they found R’ Naftali dressed in priest’s garments, and the body had not decayed at all, for R’ Naftali was truly a great tzaddik.