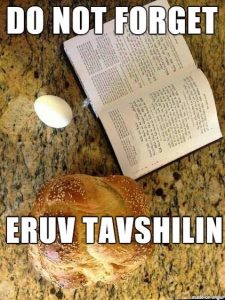 Today’s daf (Yoma 28b) contains an oft-cited and widely misunderstood rabbinic saying that Avraham Avinu kept the entire Torah. In fact, at least one Amoraic opinion mentioned in our daf goes so far as to say that Avraham didn’t just observe the laws in the written Torah, or just the laws that are clearly deduced from Torah, but also those laws that were subsequently instituted by the Rabbis such as ‘Eruv Tavshilin’ (which – though literally meaning ‘the stirring/mixing of the foods’ – is understood to refer to the practice of preparing some cooked food for Shabbat prior to a Yom Tov that falls on a Thursday/Friday thereby permitting cooking on Yom Tov for Shabbat so that the needs of Yom Tov do not overshadow the needs of Shabbat, and to restrict people from cooking on Yom Tov for weekday needs).
Admittedly, numerous commentaries do not take this reference to ‘Eruv Tavshilin’ at face value, and instead, they ascribe various meanings to what is being alluded to by this statement. For example, given its literal meaning of ‘the stirring/mixing of the foods’, the Da’at Zekenim M’Ba’alei HaTosfot (on Bereishit 18:8) quotes an opinion that – despite what some may interpret from the episode when he and Sara served food to their three guests – Avraham did not mix meat and milk.
However, there are others who understand this statement as relating directly to the concept of Eruv Tavshilin – although not necessarily the practice. For example, Rav Kook explains (Iggrot HaReiyah Vol. 1 p. 135) that we learn from here that Avraham was able to distinguish between different levels of holiness – namely that of the weekday, Yom Tov & Shabbat – which is the function of the Eruv Tavshilin. Still, there is one explanation, offered by the Sefer Yuchsin and quoted by the Maharsha, which particularly speaks to me and which I would like to share.
As we know, the concept of Shabbat is to remember that God created the world and that we should emulate God in what we do in the world (as expressed by our resting on Shabbat), and as previously mentioned, a core function of the Eruv Tavshilin is to ensure that we don’t overlook and ignore the needs and message of Shabbat.
Given this, the Sefer Yuchsin explains that the reason why Avraham Avinu is associated with ‘Eruv Tavshilin’ is that just as its purpose is to ensure we don’t forget the value and message of Shabbat, so too, Avraham taught the world that we should not forget God as the creator of the world, and that we should do all we can to emulate God.
And why does this explanation speak to me? Because I believe that the task of a religious leader – in every generation – is to be the spokesperson for the important creeds and deeds that are easily overlooked or forgotten in life, and to be an Eruv Tavshilin – of sorts – to help people remember what should be important to them.
Significantly, precisely because they are reminding people of things that are easily forgotten, a religious leader – like an Eruv Tavshilin – sometimes needs to ‘stir’ things up. Yet the goal of a leader is not to agitate. Instead, it is to help people remember what is valuable to them – at a time when precious priorities can easily be overlooked. And this is why – at least according to the Sefer Yuchsin – Chazal associate Avraham Avinu with the mitzvah of Eruv Tavshilin.
×
×