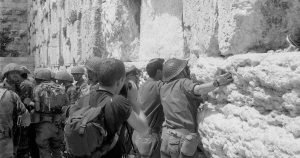 Today’s daf is Yoma 29a, and today is also the 28th of Iyar – Yom Yerushalayim – when we celebrate the victory of the six-day-war and the reunification of Jerusalem. And ordinarily, there should be no obvious connection between these two. Yet while by no means the first time when this has occurred, when I came to study today’s daf, I encountered various references which reminded me of the summer of 1967 and the events of the Six Day War.

Specifically, much of Yoma 29a focuses its attention on the words of Tehillim 22:1 למנצח על אילת השחר, although it should be noted that there is considerable debate within rabbinic texts about the actual meaning of these words. For example, Rashi, in his commentary to Tehillim 22, seemingly offers three explanations of this phrase: 1) ‘For the conductor of the musical instrument called an ayelet hashachar’; 2) ‘For the conductor of the nation of Israel which is like a doe (‘ayelet’) of the dawn (‘shachar’)’, 3) ‘For the Eternal One whose strength (‘ayelet’) is evident in dawn (‘shachar’)’. Still, when pondering each of these interpretations, they each recall an aspect of those incredibly difficult yet equally extraordinary six days in June 1967. And in particular, the reference to dawn in the verse reminds me of the early morning of June 7th when – despite what seemed to be impossible odds – the soldiers of the IDF entered the Old City of Jerusalem and arrived at the Kotel.

Interestingly, though written around a century before these events, the commentary of Rabbi Samson Raphael Hirsch on Tehillim 22 also seems to describe, in an almost prophetic tone, the  events of those difficult days in 1967: “[Psalm 22 describes how] the night of suffering enshrouds Israel in the deepest blackness of threatening destruction. Israel believes that the Lord has forsaken it, but yet it knows, somehow, that its relationship with Him has not been completed severed. Just as Israel remembers the aid which God had always given to its fathers in times of trouble, so, even while surrounded by its foes, Israel nurtures the memory of that past Divine support which always upheld it in all its fights. Thus Israel derives strength, and the confidence that the Lord will send His help once again… Then, Israel delights in the gladdening realization that it is this very experience of God’s hand amidst its sufferings that has enabled it to proclaim God’s might unto all its future generations as well as unto all the rest of mankind.”

However, the connection does not end there. For example, it is noteworthy that one of the most influential books describing the unfolding redemption of the Jewish people in the Land of Israel – which was written in the aftermath of the Six Day War by Rabbi Yaakov Filber – is called אילת השחר. And why? Because, to his mind, the events that he saw with his eyes were nothing less than a new dawn that was worthy of a new song for the Jewish people.

Returning to our daf, while it associates the phrase אילת השחר with miracles and especially the miracle of Purim, one final explanation is given in the daf which translates the word אילת as a form of prayer and which emphasizes the importance and centrality of prayer for the Jewish people. And why is this relevant? Because while the Six-Day-War was a military victory, undoubtedly the most powerful moments of that time were expressed by the cries of the soldiers at the kotel, as Haim Hefer expressed in his beautiful poem:

This Kotel has heard many prayers,

This Kotel has seen many walls fall,

This Kotel has felt wailing women’s hands and notes pressed between its stones,

This Kotel has seen Rabbi Yehuda HaLevi trampled in front of it,

This Kotel has seen Caesars rising and falling,

But this Kotel has never before seen paratroopers cry.

This Kotel has seen them tired and exhausted

This Kotel has seen them wounded and scratched-up

Running towards it with beating hearts, with cries and with silence

Pouncing out like predators from the alleyways of the Old City

And they’re dust-covered and dry-lipped

And they are lighter than eagles and more tenacious then lions

And their tanks are the fiery chariot of Elijah the Prophet

And they pass in fury

And they remember the thousands of terrible years in which we didn’t even have a Kotel in front of which we could cry.

And here they are looking at it with the sweet pain

And the tears fall and they look awkwardly at each other

How is it that paratroopers cry?

How is it that they touch the wall with feeling?

How is it that from crying they move to singing?