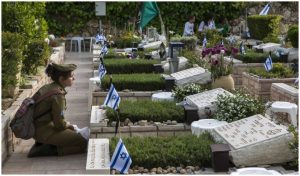 A word that appears regularly in today’s daf (Yoma 3b) is קח – take – which is discussed with reference to the contributions given and the donations made to the Mishkan.
Significantly, the term קח is used in a range of different ways in the Torah. For example, it is used with respect to marriage (see Bereishit 24:51, Devarim 22:13). It is used in the story of Avraham who purchased Ma’arat HaMachpelah at great personal cost (Bereishit 23:13). It is used when charging individuals with missions concerning the salvation and protection of the Jewish people (see Shemot 7:9). And it is used with respect to death- as in Iyov 1:21 where we read ה’ נָתַן וה’ לָקָח, ‘God gave, and God took back’.
Today is Yom Hazikaron which is a day that is captured by the concept of קח.
On Yom Hazikaron we remember how God has brought us back to the land (see Shemot 6:8 which speaks of God giving us the Land as a מורשה), which is a land that we love and with which we have a marriage-like relationship with (as the Midrash says, אל תקרי מורשה אלא מאורסה).
A land that is ours, but one that has cost us dearly.
A land where Judaism is most alive, yet is – on Yom Hazikaron – a land that cries out to us while reminding us of those who died in her defense.
A land that has been built through the tireless endeavours of men and women who have contributed to the salvation and protection of the Jewish people.
And a land where we have sadly heard the words ה’ נָתַן וה’ לָקָח, ‘God gave, and God took back’ at the thousands of funerals of men and women who were killed in their service of our nation or in terrorist attacks.
In today’s daf we are informed that whenever the phrase קח לך – ‘take for yourself’ is used, it means, משלך – of yourself.
On Yom Hazikaron this message is felt in a very powerful way when we remember those whose very selves were taken.
To them, and to their families, we owe an immeasurable debt of gratitude.
×
×