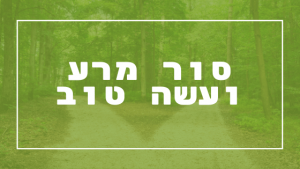 The Mishna (Yoma 3:3) in today’s daf (Yoma 30a) states that ‘no one may enter the Azara (Temple Courtyard) for service – even if they are tahor (spiritually pure) – unless they immerse in a mikveh’. However, this seems like a strange demand. As Ben Zoma was asked, ‘why does a kohen need to immerse in a mikveh even if he is tahor?’, to which he answered that just as the Kohen Gadol immersed himself five times on Yom Kippur even though he remained tahor throughout, so too, the demand of immersing in a mikveh for spiritual service applies even to someone who is also tahor.

However, Ben Zoma’s response feels like an incomplete answer– especially since the service of the Kohen Gadol on Yom Kippur differs so significantly from other aspects of service. Given this, I would like to present a further answer to this question based on Rambam’s commentary to Mishna Para 3:3, as explained by Rav Asher Weiss.

We often think that we can divide between those who are spiritually tahor (pure) and those who are spiritually tameh (impure). However, there is – in fact – a third category, which is ‘not tameh’ (not impure), and while someone who was pure and has not become tameh is considered ‘not tameh’, we are taught that only a person who has actively immersed to become tahor is granted the affirmative status of ‘tahor!’.

Understood this way, the demand stated in our Mishna that, ‘no one may enter the Azara for service – even if they are tahor – unless they immerse in a mikveh’ now makes sense, because it requires that all those present aren’t just ‘not tameh’, but are – instead – ‘tahor’!

Yet there is a further corollary of this thesis as explained by Rabbi Weiss with reference to the teaching in Brachot 34b that, “in the place where ba’alei teshuva (those who have actively changed their ways to lead a Torah observant life) stand, even tzadikim gemurim (those who have been absolutely committed throughout their life to living a Torah observant life) are unable to stand”.

The question asked by many commentaries is why is this the case? Why is the ba’al/ba’alat teshuva considered to be on a higher level than even tzadikim? To which R’ Weiss answers that just as the active immersion in a mikveh grants confirmed ‘tahor’ status, so too, someone who takes significant measures to transform and purify themselves attains a higher spiritual status than even those who have worked hard throughout their life to maintain a status of ‘not tameh’. What we learn from here is that growth in spirituality requires that we do more than “turn from bad” (Tehillim 34:15). Instead, we are expected to actively “do good” (ibid.) and to take active steps to upgrade ourselves and our lives to reach the status of ‘tahor’.

Ultimately, true growth is not just about staying away from spiritual danger or trouble, but rather, about making headway towards spiritual improvement and transformation. And though this message is prevalent throughout Jewish teachings, it was certainly demanded of those who came to serve in the Beit HaMikdash.