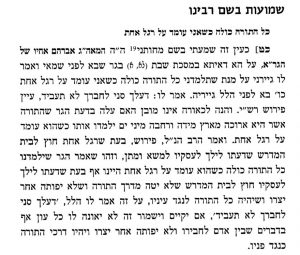 Some weeks ago I learnt a fascinating insight explaining a well-known Gemara and then today, when pondering a curious statement in today’s daf (Yoma 33b), I realised that perhaps these two are connected. Let me explain.
At the back of the Sefer ‘Ma’alot HaTorah’ of Rabbeinu Avraham the brother of the Vilna Gaon is a section containing some of his ‘Biurim U’Ma’amarim’ – insights and sayings, and among this is a section where Rabbeinu Avraham explains the Gemara (Shabbat 31a) where the prospective convert comes to Shamai, and then to Hillel, and asks to be taught Torah while standing on one foot. As we know, Shamai dismissed him ‘with the builder’s cubit in his hand’, while Hillel converted him and taught him: ‘that which is hateful to you do not do to another; that is the entire Torah, and the rest is its interpretation – go study!’
Reflecting on this Gemara, Rabbeinu Avraham struggles to make sense of the notion that the Torah – in whatever measure – can be communicated to someone ‘while standing on one foot’. Given this, he offers a remarkable insight that this prospective convert was standing at the threshold of the Beit Midrash – with one foot in the Beit Midrash and another outside – thereby indicating his interest not only in studying Torah but also in engaging in the world of business. Simply put, he was saying to Shamai and Hillel, ‘convert me, but though I want to be engaged in Torah, I also want to be engaged in the world of business, finance and in the marketplace’.
Understood this way, then Shamai’s reaction – dismissing him ‘with the builder’s cubit in his hand’ – is profoundly symbolic as if to say that while it is possible to blend Torah and an occupation (nb. some learn from here that Shamai was a builder), someone who is yet to commit themselves to Judaism and who wishes to convert needs, at that moment, to make an absolute commitment to the world of the four cubits of halacha (i.e. the Beit Midrash), and if they are unprepared to do so, then they are not a suitable convert and should simply return to their world of business and building.
In contrast to this, when Hillel said ‘that which is hateful to you do not do to another; that is the entire Torah, and the rest is its interpretation – go study!’, he communicated how that the laws of the Torah apply to the marketplace, and that by being ethical in the marketplace, while continuing to study, the individual could successfully exist with a foot in both worlds.
And how does this connect with today’s daf? Because it quotes Shemot 26:35 which states – with reference to the Mishkan – that ‘the Menorah should be placed opposite the Shulchan (table)’ which our daf (Yoma 33b) then explains to teach that ‘we require that these two (i.e. the Menorah and the Shulchan) ‘see’ one another’. The obvious question is what is meant by this?
We are taught elsewhere (Bava Batra 25b) that the Shulchan symbolized wealth, while the Menorah symbolized Torah knowledge. Given this, by requiring that each ‘see one another’, this means that there should be a direct correlation between our world of Torah learning and our world of business – the Beit Midrash and the marketplace – where one should ‘see’ the other and be aware of the other’; Torah should be taught with an awareness of its application beyond the walls of the Beit Midrash, and we should continue to be cognizant of Torah laws and ethics while in the marketplace.
×
×