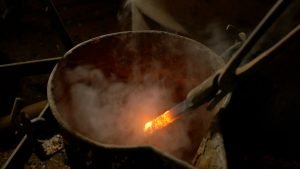 In general, my daf insights on Motzei Shabbat reflect the fact that Shabbat provides me with more focused time for limud Torah than the average weekday, which means that my motzei Shabbat daf thoughts are generally expressive of the spiritual and intellectual gain accrued from the menucha of Shabbat.
Unfortunately, this isn’t the case this week, and though we were only interrupted by one siren in Even Shmuel, much of Shabbat was disturbed by the many iron dome interceptions of rockets shot by Hamas from Gaza – with the intention to maim and kill innocent Israelis – which we could see from our home, as well as by the ensuing shaking of ground in our neighbourhood which occurs whenever missiles are fired or rockets are intercepted. Given this, and before I proceed to offer a brief thought on the daf, I would like to express my heartfelt thanks to all the men and women of the IDF who continue to dedicate every ounce of their energy to defend and protect the citizens of the State of Israel, and my heartfelt plea to God that the people of Israel should continue to live, in peace, in the State of Israel.
Returning to the daf, you may recall that my thought on Yoma 31b quoted from the Mishna (Yoma 3:5) stating that ‘if the Kohen Gadol was old or was physically sensitive, they heated water for him and poured the hot water into the cold mikveh water so that it would lose some of its chill’, while today’s daf (Yoma 34b) quotes a Beraita which suggests that the water was heated in a different manner: ‘Rabbi Yehuda said: “They would heat iron bars on Erev Yom Kippur and cast them into the cold water [on Yom Kippur] so that it would lose some of its chill.”’
Reflecting on this process, the Gemara then raises a halachic query, because by casting hot iron bars into cold water on Yom Kippur, the iron is strengthened and hardened which falls under the melacha of ‘makeh b’patish’ (literally, ‘striking the final blow’ but effectively any action that improves or completes an article). Given this, how could such an action be sanctioned?
To this, Rav Bibi answered that since the iron was not so hot, it was not strengthened and hardened, while Abaye disagrees and answers that in this instance, the consequence of the strengthening and the hardening of the iron was unintentional (‘davar sh’eino mitkaven’) and that the level of ‘makeh b’patish’ in such a case is rabbinic rather than biblical.
I mention this because there have been times when those who have sought to attack us and do us harm have been described in terms of ‘coldness’ (see Devarim 25:18). However, what such people seem to forget is that by attacking us, our resolve as a people is strengthened and hardened (nb. a similar idea is also expressed by the egg eaten by a mourner which, as Rabbi Maurice Lamm explains, ‘is one of the only foods that harden the longer it is cooked’). Simply put, while the intention of those who wish to do us harm is to break our spirit, their despicable actions unintentionally strengthen our spirit and resolve as a nation.
Together we hope and pray for better times when the good people in this region can live together in peace. But until then we as a nation will, with a strengthened and hardened spirit, actively defend our lives and our right to life, while praying for the welfare of all those in the IDF who are working so hard to provide us with that protection.
×
×