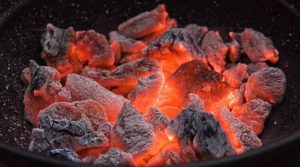 In today’s daf (Yoma 46b) we are informed of a debate concerning someone who, after scooping up coals from the altar for the incense fire-pan, extinguishes a coal. And why should this be a problem? Because we are taught that ‘a permanent fire shall be aflame on the altar; it shall not be extinguished’ (Vayikra 6:6) – from which we derive that there is a prohibition of extinguishing fire of the altar.

However, the Gemara then informs us of the opinion of Rabbi Nachman who raises the question of the permissibility of extinguishing a coal that has been removed from the altar for a mundane reason rather than for use with the incense. Concerning such a case, the Gemara responds that the coal ‘was not removed for its assigned purpose’ and it therefore retains its status as ‘the fire of the altar’. Consequently, someone who extinguishes it is liable.

Having read this, I was moved by the idea that even a piece of coal has its own assigned purpose, and how the act of removing a coal – for a reason for which it was not assigned, leading to the coal being extinguished – is considered to be improper.

And if this is the case with respect to a physical piece of coal, then surely this applies far more to people who can – for various reasons – veer away or be redirected from their mission and purpose, and who can – for a variety of reasons – either personally extinguish or experience others extinguishing parts of the inner flame of their soul.

Ultimately, each of us have our own mission and purpose – as determined by our time and our location, which we are each driven to realise by the inner flame of our soul. And though, as Abaye and Rava discuss, sometimes we can lose our spark while involved in our ‘assigned purpose’, it is clear – as evident from the Gemara’s response to Rabbi Nachman – that we should not remove ourselves, or allow ourselves to be removed, from our assigned mission and purpose, especially if this leads to the extinguishing of parts of the inner flame of our soul.