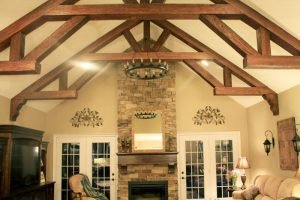 Today’s daf (Yoma 47a) makes reference to the righteous actions of some of Kimchit’s sons, and it then quotes a Beraita stating that she had seven sons and that all of them served as Kohen Gadol.
This clearly impressed the Sages of the time, and they therefore enquired of Kimchit: מה עשית שזכית לכך?, ‘what actions did you perform to achieve this extraordinary outcome [that all of your seven sons serve as Kohen Gadol]?’ – which could mean, ‘which particular religious/ritual action did you do which made you spiritually worthy that all your seven sons serve as Kohen Gadol?’, or it could mean, ‘what were your methods of education in your home to have all seven of your sons capable and willing to be Kohen Gadol?’.
To this, Kimchit replied מימי לא ראו קורות ביתי קלעי שערי – ‘in all my days, the beams of my house did not see the braids of my hair’ – meaning that Kimchit identified a particular stricture that she had adopted of keeping her hair covered, even while within her home, which she thought to be the cause of her sons being worthy to serve as Kohen Gadol. Attempting to explain the logic of her argumentation, Rashi – quoting the Yerushalmi (Yoma 1:1) – references Tehillim 45:14 which states how, ‘all the honour of the king’s daughter is within; her raiment is superior to settings of gold’, which the Yerushalmi explains to mean that ‘a modest woman is worthy to have sons who are Kohanim Gedolim who wear clothes that have settings of gold’.
However, the Sages then respond to Kimchit with a phrase (which is also employed elsewhere in the Gemara – see Niddah 70b & 71a) that הרבה עשו כן ולא הועילו – meaning, ‘many have done this and it did not bring about this [kind of] result’.
What this tells us is that the Sages challenged the claim made by Kimchit of causation, and perhaps even correlation, between the stricture which she adopted of covering her hair in her home, and the outcome of her seven sons being worthy of the position of Kohen Gadol (which further suggests that the original question asked by the Sages of מה עשית שזכית לכך did not presume that there was a singular religious/ritual action which Kimchit had performed to generate this outcome, but instead, sought to ask her about the methods of education which she had employed in her home).
The problem is that while the first part of this Gemara, namely the claim of Kimchit, is often quoted in schools and Jewish books, the response of the Sages is often omitted. And why is this problematic? Because a prevalent feature in contemporary Orthodoxy is the presumption that the adopting of particular religious/ritual strictures, especially by women, will ‘guarantee’ children who wish to serve God faithfully. Yet, as the Sages response shows, this is not what this Gemara is saying. In fact, it actually challenges the presumption made by Kimchit that her stricture was the cause of this outcome.
Of course, none of what I have explained is meant to undermine the pious actions of individuals who humbly, and of their own volition, adopt strictures for themselves within their own home. At the same time, what is clear is that we should all be very wary of presuming or of claiming that the actions that we perform – however sincerely we perform them – is the cause of particular outcomes in the lives of others, or that there is a direct correlation between specific religious/ritual strictures that we practice, and the religious choices of our children.
Go to Top