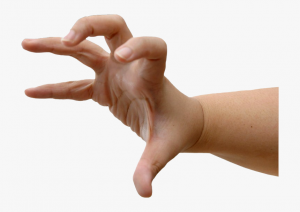 In yesterday’s daf (Yoma 47b) we encountered three questions of Rav Pappa, to which the Gemara responded with the word ‘Teiku’. In today’s daf (Yoma 48a-b), we encountered three further questions of Rav Pappa, along with an additional question of Mar Bar Rav Ashi, to which ‘Teiku’ was again the response. And in tomorrow’s daf (Yoma 49a), we find a further question posed by Rav Pappa, to which the Gemara – once again – responds with ‘Teiku’.
Significantly, not all these questions query the same point of law. Still, most address the same theme, namely the way in which a Kohen should grasp things in his hand. For example, ‘Does the law of the mincha offering where what is in-between the fingers doesn’t count, apply to the incense which the Kohen Gadol holds on Yom Kippur?’, or ‘Does a full fistful include with fingertips, or if taken from below, or if taken from the sides?’, or ‘Do two separate handfuls put together count?’, or ‘Must the Kohen Gadol himself take with his hands, or can someone else do this for him?’. And in response to each of these questions, the Gemara tells us ‘Teiku’.
Reflecting on this repeated response of ‘Teiku’, I am reminded of what Rav Soloveitchik was told by his father when he encountered this word. ‘I asked him why the Talmud did not resolve the problem under discussion in so many cases [and] instead… concludes with the phrase ‘teiku’ [“stalemate”]. Why was no conclusion reached by the talmudic sages? My father explained to me that a Jew must apprehend that they cannot understand and comprehend everything. When a Jew learns that there are halakhot which are ambiguous, then they will also come to the realization that there are other areas that are also not clear-cut. [Similarly], in matters of faith, teiku will also be encountered. The greatness of Avraham, our forefather, was that he knew how to say “Here I am” (Bereishit 22:1) even though he did not understand the request that God made of him. The basis of faith is teiku. If a Jew does not master the concept of teiku, then they cannot be a true believer.’ (The Rav Vol. 2 p. 62)
Applying this to the various questions posed by Rav Pappa and by Mar Bar Rav Ashi, it is clear that there are things in life which we can grasp, and it is equally clear that there are things that we cannot. But there are also things that we aren’t certain whether we can or we can’t grasp them. And even if we do, we are not sure whether we have truly or fully grasped them.
And it is this knowledge of not knowing what we can or cannot grasp that is, ultimately, the meaning of ‘Teiku’.
Go to Top