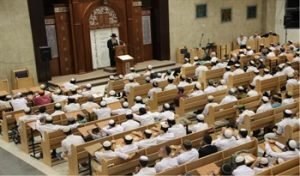 A curious statement is found in today’s daf (Yoma 50a), which can also be found elsewhere in the Gemara (Moed Katan 24a, Zevachim 93b, Menachot 7b & 26b), and which requires some background, and some explanation.
In terms of our daf, the topic of discussion between the 3rd century Amoraim Ravin Bar Rav Ada and Rava was the bull offered by the Kohen Gadol on Yom Kippur, and specifically, whether this offering was a personal, or a communal offering.
As is clear from this opening discussion, as well as much of the discussion throughout the rest of today’s daf, Rava was of the opinion that the bull was a personal offering. However, in an attempt to challenge Rava’s position, Ravin Bar Rav Ada notes that Rava’s own students had previously quoted the opinion and sevara (rationale) of Rav Amram that the bull was a communal offering.
And why is this so curious? Because if Rava’s students knew this teaching of Rav Amram, it suggests that they had heard it from Rava himself and that Rava – at least on a theoretical basis – may actually hold the alternative opinion that the bull offered by the Kohen Gadol on Yom Kippur was a communal offering.
Interestingly, though Rava continues to argue his position, he does not respond to the specific reference by Ravin Bar Rav Ada to his students – which itself is even more curious. And this leads us to a number of possible conclusions in terms of Rava’s silence.
Firstly, Rava may have been offended by Ravin Bar Rav Ada for invoking his students in a debate between them, and thus he did not respond.
Alternatively, Rava may have felt that by referencing his students – who likely heard Rav Amram’s statement from him – that Ravin Bar Rav Ada was criticizing Rava’s teaching methods. Here too, Rava may have felt that this remark did not deserve a response.
Perhaps Rava did teach his students about Rav Amram’s position as part of a theoretical discussion, but was then surprised to hear that his students seemed to favour Rav Amram’s position, and thus Rava’s silence reflects his confusion.
Or perhaps Rava felt that there was nothing to comment about, because students are allowed to think differently to their teachers, and so he was proud to know that his students had done so in this case.
Overall, though it is not clear which of these responses, if any, best reflect the feelings of Rava, the fact that Rava’s students did quote the opinion of Rav Amram suggests that Rava, one way or another, taught the opinion of Rav Amram. And to my mind, this is itself one of the most important lessons we can learn from this episode – that a teacher should be prepared to teach positions that they themselves do not agree with, and trust their students to evaluate each opinion in order to reach their own decision.
Go to Top